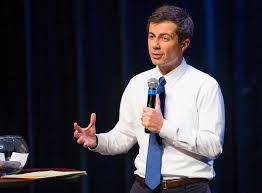 All three will be central to Biden’s plan to remake the country’s automobiles and transportation systems to quickly cut climate-damaging petroleum emissions.

Buttigieg would be the first openly gay person confirmed by the Senate to a Cabinet post. At 38, the former mayor of South Bend, Indiana, would also add a youthful dynamic to an incoming administration that is so far dominated in large part by leaders with decades of Washington experience.

Biden said in a statement that Buttigieg was a “patriot and a problem-solver who speaks to the best of who we are as a nation.”

Granholm, 61, served as Michigan’s attorney general from 1999 to 2003 and two terms as Michigan’s first female governor, from 2003 to 2010. She was a supporter of Biden’s presidential bid and has spoken out against President Donald Trump’s attempts to overturn the election results, accusing him of “poisoning democracy.”

The intended selections of Granholm and McCarthy were confirmed by three people who were familiar with one or both of the picks. They spoke to The Associated Press on condition of anonymity because they were not authorized to speak publicly before the president-elect’s announcement.

Biden is steadily rolling out his choices for Cabinet secretaries, having already selected former Obama adviser Tony Blinken as his secretary of state, retired Army Gen. Lloyd Austin as his secretary of defense and former Fed Chair Janet Yellen as his treasury secretary. He’s also picked former Agriculture Secretary Tom Vilsack to reprise that role in the Biden administration, and Ohio Rep. Marcia Fudge to serve as housing secretary.