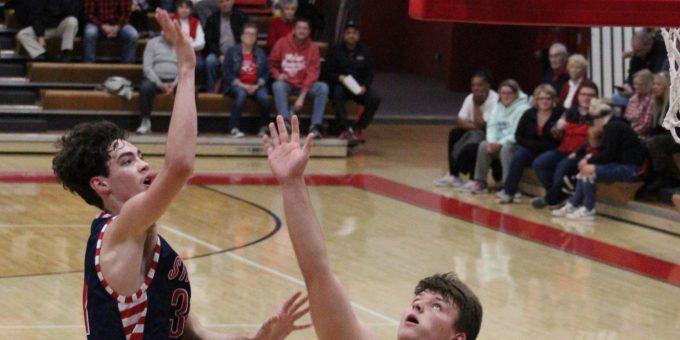 BEDFORD – The most stated phrase in this never-ending virus period has been “We’ve never done this before.” And that, unfortunately, is exactly correct. There is no precedent.

So when Bedford North Lawerence senior Jackson Miracle, as astute as he is tall, mentioned “We’ve never had a Senior Night like this before” as the six upperclassmen in the program prepare for their honor night, he is exactly correct. This is yet another new adjustment.

“It’s the right thing to do, just to make sure we get a Senior Night,” BNL coach Jeff Hein said. “You just don’t know what will happen in the future.”

Messmore and Cosner learned that lesson during the football campaign. After nine regular-season games, BNL’s season ended abruptly prior to the postseason when members of the coaching staff tested positive. Nothing can be guaranteed.

“I appreciate what we’re doing,” Messmore said. “It’s nice to get it in with all the circumstances. We don’t know what tomorrow will bring us. But it is an adjustment. It might be a little emotional, but we potentially have a lot of games left. But it is still a big night.”

Miracle compared this situation to a big-brother role, showing the younger generation how to handle any adversity. Nobody has gone through more than this 2021 class.

“Basketball has really helped my life,” he said. “It means a lot. You’re like everyone’s big brother, you’re supposed to be there for them, lead them and show them what to do.

“It’s going to be different from the senior nights I’ve attended. Probably not as heartfelt with the end of the season, but it will be sad because it is our senior season.”

Madison can certainly sympathize with any virus concerns and schedule alterations. The Cubs will be making their belated season debut after postponing their first three games because of quarantines. For second-year Madison coach Sherron Wilkerson, that delay worked as a benefit rather than a problem.

“We try to see the silver lining in everything,” Wilkerson said. “We had some guys that needed some extra time to heal up, so it really was a blessing in disguise. Obviously you want to play games, but at the same time you want to make sure you’ve properly prepared yourself to play those games. At that time, we felt like we could use some extra time.

“They will be game tested, which we are not. The one advantage we have is seeing them on film. They haven’t had the chance to prepare for us the way we’ve prepared for them.”

Indeed, the Cubs are something of a mystery, although they have four starters back from last season and they’re senior dominated. Luke Miller, the son of Hanover coach Jon Miller, and Luke Ommen lead a talented backcourt.

“Sherron likes to spread your defense out and attack off the dribble, penetration and kick for threes,” Hein said. “It’s a different style, they like to get up and down and they like to play faster. Tempo will be big and we have to control that, one way or the other.

“It’s hard to scout them because they haven’t played. The only thing to go on is last year’s game.”

Last year, the Stars won 64-55 as Brayton Bailey scored 27 points, grabbed 8 rebounds and handed out 6 assists. Many of those went to Miracle, who added a career-high 14 points. The Stars shot a blistering 65 percent (Bailey was 13 of 17) and went on a 12-1 run in the third quarter to take control.

Now BNL (1-2) will have to rely on its seniors, plus sophomore Colten Leach. Cosner leads the Stars in scoring at 10.0 while Leach contributes 8.0 for an offense that has struggled.

“They’re well coached,” Wilkerson said in his scouting report. “It‘s one thing to be talented, but it’s another to be talented with a work ethic. We see hard work beat talent when talent won’t work hard.