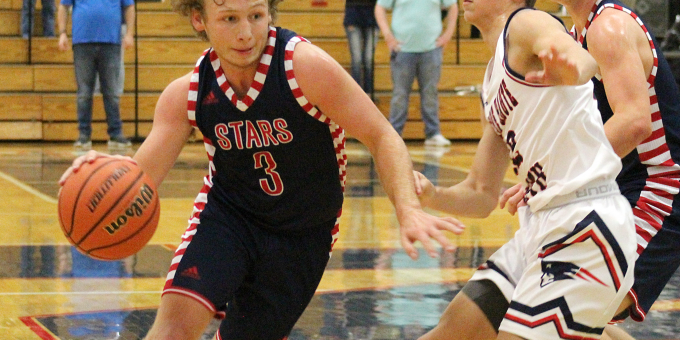 BEDFORD – Somewhere on the road to Terre Haute, and that 85-mile trip grants plenty of time for personal awareness, Bedford North Lawrence changed its team personality. Or maybe it was something as simple as Jackson Miracle’s new red head band.

In the short span of 24 hours, the Stars mutated. Softness got dumped off the bus somewhere on one of those State Road 46 curves in Clay County. The team that conquered Terre Haute North on Saturday night, after getting smacked by Bloomington South, was tougher on the offensive end.

Willpower is not usually an offensive trait. That’s supposed to be the easy part of the game. Defense is the hard work. Yet the Stars (1-2) had been gritty defenders during their first two contests. They had surrendered 42.5 points per game.

During the overtime win at Terre Haute North, they had offensive resolve. Perhaps scoring 50 points does not represent a volcanic eruption, but after scoring only 57 points in those two losses, it was something. And the momentum that victory created for the Hoosier Hills Conference opener at Columbus East on Friday night was off the charts.

“The big thing was we battled a lot more,” BNL coach Jeff Hein said. “We played with a chip on our shoulder after getting embarrassed. I thought we played better in the second half of the South game, and that did carry over.

“We were more aggressive. We faced a lot of adversity. (Colten) Leach was in foul trouble and we played without him for a long time. Kooper (Staley) came off the bench and played great. So I was proud of the way we battled and the effort we gave.”

Actually, the shift wasn’t anything dramatic. It was a function of fixing little things that led to a big result.

“We weren’t screening well, cutting hard, making the pass at the right time,” Hein said. “It had been a long time since we had played at the speed of the game, and at the varsity level a half-second means a lot.

“We didn’t hang our heads and feel sorry for ourselves. That was a good Terre Haute North team, so that was a great win on the road.”

The next challenge will be equally difficult. The Olympians (0-3) are much better than the imperfect record indicates. The setbacks to Class 3A No.1 Silver Creek (106-81), Noblesville (72-68) and 2A No.12 Southwestern (75-68) came against opponents with a combined 7-1 record. And notice the fact East has not struggled to score.

”Boyer is a nice player, a really good scorer,” Hein said. “It starts with him, and they have some other kids with him.”

BNL won last year’s clash 73-36, with a opening blast that was impressive. The Stars roared away with a near-perfect first quarter of spectacular basketball, crushing East’s will into dust with a 27-6 eruption. The next 24 minutes were just mandatory as BNL rushed to a 41-14 lead in the second quarter and pulled away.

“They beat us by 100 last year,” East coach Brent Chitty said, and it probably felt like it. “They play hard and find ways to compete against anyone they play.”

Brayton Bailey scored 18 points and grabbed 10 rebounds that night, while Miracle added 12 points. BNL shot 61 percent, East was a miserable 8 of 34 and got outrebounded 35-14. Major was absent with an injury, but that doesn’t explain the no-show effort from the Olympians. “Our energy level was horrible,” Chitty said afterward. “They just whipped us. We got whipped. Mentally, we just kind of gave up.”

“They did not get off the bus, they didn’t handle it very well,” Hein said. “We didn’t expect that. We got off to such a good start and were able to maintain it. Now it will be a different type of game.”

Ben Cosner leads the Stars in scoring at 10.0 while Leach is contributing 8.0.

Last meeting: Last year at BNL, the Stars roared to a 22-2 lead and slammed the Olympians 73-36. Brayton Bailey had 18 points and 10 rebounds while Jackson Miracle had 12 points for BNL. Jacob Pierce had 13 points for East.