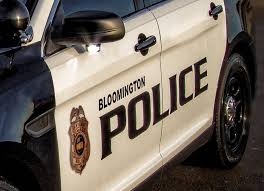 (BLOOMINGTON) – Officers arrested two people involved in a robbery and shooting that resulted in a man’s death.

On October 26th, at approximately 8:32 p.m. Bloomington Police officers were called to a residence in the 1600 block of North Willis Drive after numerous calls of multiple shots fired.

When police arrived they found an unresponsive 26-year-old man on the front porch of the residence with a gunshot wound to his chest, said Bloomington Police Department Captain Ryan Pedigo.

Officers immediately began resuscitation efforts and the man was transported by ambulance to IU Health Bloomington Hospital. The man died on the way to the hospital.

Investigators spoke with several witnesses, some of whom claimed to have been inside the residence at the time of the shooting.

“It is believed that three males had been invited to the residence by the victim,” Captain Pedigo added. “However, once at the residence, the suspects reportedly attempted to rob the victim and multiple gunshots were fired during the course of the robbery.”

The three males then fled the area prior to the arrival of officers.

McFadden was arrested and transported to the Monroe County Jail on charges of murder and robbery resulting in serious bodily injury.

Investigators continued the investigation in an effort to determine the identities of the two other men involved in the robbery and murder.

On November 24th, investigators were able to determine the location of one of the other males. Police learned he was at an apartment in the 2100 block of Shelburne Drive in Indianapolis.

Officers from the Indianapolis Metropolitan Police Department responded to the apartment and arrested 23-year-old Keshawn Bess, of Indianapolis.

Bess was transported to the Marion County Jail and is currently being held
on the charges of murder and robbery resulting in serious bodily injury.