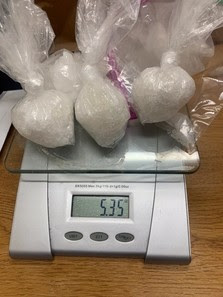 Units with the Indiana State Police Drug Enforcement Section (DES) began an investigation in October after receiving information about alleged drug activity at a Jeffersonville address. The Sellersburg Post All Crimes Policing Squad (ACP) assisted. At the conclusion of their joint investigation, officers requested and received a search warrant.

On Wednesday, DES and ACP units served the search warrant on 1420 Grubbs Avenue in Jeffersonville. During the search, officers discovered over 5 ounces of suspected methamphetamine, as well as marijuana and other drug-related items.

Christian Abbott was transported to the Clark County Jail without incident.