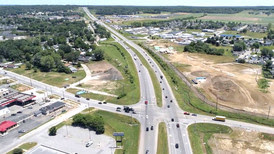 (MARTINSVILLE) – Many motorists have heard about the closure of State Road 37 in Martinsville in 2021, but we’re sure there are questions about what to expect and how to get around.

A new addition to the I-69 Finish Line website provides some answers. You can now head to I69FinishLine.com/closure as your one-stop shop for information about the temporary closure.

The closure is expected to begin as soon as January 2 and continue for most of the year. The official detour for north/south highway traffic follows S.R. 39, S.R. 67 and S.R. 144. Several roads will remain open throughout the closure to provide local access in the area. Click here to see a map of local roads that will remain open to maintain connectivity.

INDOT completed numerous projects this year to help safely move more traffic through roads expected to serve as alternate routes. You can view this map of the improvements and read more about the work on the closure page.

Safety and shortening the construction timeline are two of the main benefits of the full closure. By removing live traffic from the construction zone, it will be a safer environment for motorists and workers.

The time savings is substantial. The full closure will allow work to be completed a full year faster than trying to maintain limited access during the work. New pavement and bridges supporting the I-69 lanes will be under construction during the closure.

Work has been completed to widen S.R. 39. Watch this short video to learn more. Much of S.R. 39 in Martinsville has been widened to four lanes between S.R. 37 and S.R. 67 to safely carry more traffic during next year’s closure of S.R. 37 in Martinsville. Final striping was completed over the weekend.

I-69 Finish Line is upgrading S.R. 37 to interstate standards from Martinsville to Indianapolis. It’s a project that will improve safety, reduce travel time and open the door to new opportunities.

The realignment and reconstruction work along Commercial Drive is expected to wrap up later this month. When complete, access will be restored between Industrial Drive and Gardner Avenue.

Progress continues on the temporary traffic signal at S.R. 37 and Henderson Ford Road. Watch for temporary lane restrictions this week as signal heads are installed. The new light should be operational later this month.

SR. 252 is expected to close next week east of Cramertown Loop for installation of a drainage structure. Access to Grand Valley Shoppes from S.R. 37 will remain open via Cramertown Loop. Click here to see a map of the closure. The detour will follow S.R. 135 to S.R. 44. The work is expected to take about a week to complete.

Mahalasville Road is expected to close between S.R. 37 and Southview Drive on Tuesday, Nov. 3 and stay closed for about a week. Crews will install a new sewer line under the road. Motorists will use Southview Drive and Burton Lane to access Gardner Avenue.

Crews are also beginning median work on S.R. 37 north of S.R. 144. Watch for daytime lane closures at several locations where the roadway is being widened.

Watch for flaggers during pavement patching on James Baldwin, Robert Curry and Southview Drive. The work is expected to take a couple of weeks to complete.