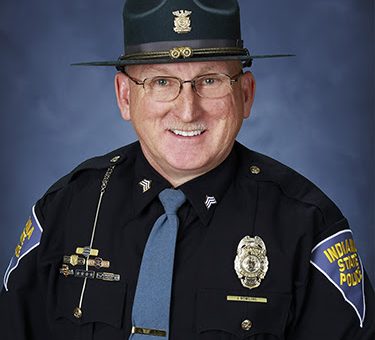 (PENDLETON) – The Pendleton District Public Information Officer, Sergeant John Bowling, will soon be retiring after completing 29 years of service with the Indiana State Police. Bowling, a Wayne County native, graduated from Centerville High School in 1979, and I.U. East in 1982 with an Associate Degree in Criminal Justice.

After college Bowling worked as a college campus police officer, then at the Richmond State Hospital as a recreational therapist and as a drug and alcohol counselor. In 1988 he went to work at the Wayne County Sheriff’s Department as a Jail Deputy. In 1990 he applied to the Indiana State Police and was chosen to attend the Indiana State Police 49th Recruit Academy in 1991. Upon his graduation from the Academy in November 1991, Bowling was assigned to the Redkey District to patrol Jay and Randolph Counties.

In 1996 Bowling transferred back home to the Connersville District, assigned to patrol Wayne County. He was assigned to the Tactical Intervention Platoon for 8 years and spent 10 years as a Field Training Officer, having a hand in training over 12 troopers. In 2004 he was chosen to attend FBI training and became certified as a Hostage Crisis Negotiator.

In 2007 he applied for the Public Information Sergeant opening at the Connersville Post. Bowling was chosen for the position based upon a competitive selection process that included written testing, oral interview, seniority, education, and past job performance. He served in that capacity until 2010, when the Connersville and Redkey Posts were closed and consolidated with the Pendleton District.

In 2011, after serving a year as an Administrative Sergeant at Pendleton, Bowling was reassigned as the Pendleton District Public Information Sergeant, where he has served until his retirement. Bowling and his wife reside in Henry County and look forward to spending time with family and traveling.