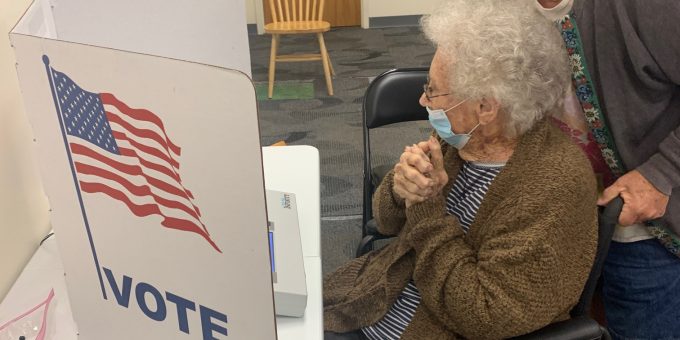 (BEDFORD) – The Lawrence County Election board met on Wednesday afternoon to address concerns and make sure the county is ready for election day.

According to Lawrence County Clerk Billie Tumey, 3,835 absentee ballots have been sent out with 3,356 of those being turned in to be counted.

A total of 8,369 votes have been cast so far in this year’s election, with a total of 11,725 voters casting their ballots. There has been a 36 percent voter turnout at this point before voters head to the polls on Election Day.

Five machines were used for early voting at the Mitchell Community Center on Saturday. According to Tumey, 431 cast votes there Saturday.

There are six machines at Courthouse Plaza to handle the 500 plus voters averaged each day. On Saturday, 517 people voted.

Due to COVID-19 restrictions at local nursing homes, residents were sent mail in ballots.

There have been a few complaints received by the election board. One complaint received was a candidate blocking the handicap access at the Courthouse Plaza. Candidates were also reported campaigning at the entrance of the voting centers without wearing masks.

Election officials also filed a criminal complaint on a person who entered a restricted area after being advised they could not enter that area. The complaint was turned over to the Lawrence County Prosecutor’s Office and no charges were filed.

Tumey will be training election workers on Saturday so everyone will be ready on Election Day. At this time, there are enough people to staff all voting centers. Extra precautions for social distancing and sanitation will be in place.

Seven teams will be on hand to count the large number of absentee ballots on Election Day. They will start counting those ballots at 8 a.m.

Any questions or concerns can be addressed by calling the Voter Registration Office.

For all your election coverage and results stay tuned to 1340 AM WBIW, Southern Indiana Classic Hits 105.5 WQRK, and Litefm 102.5 WPHZ.