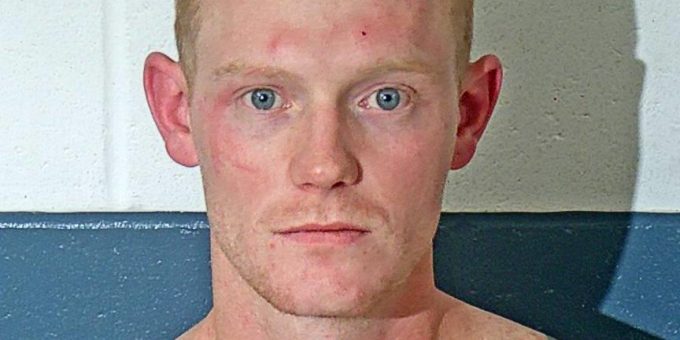 (MITCHELL) – Mitchell Police officers arrested a man after they were called to a fight early Tuesday morning.

According to a probable cause affidavit, officers were called at 2:12 a.m. to a fight in the 1120 block of West Oak Street. Police had been at the home a few days prior after a report of threats. On that call police spoke to a man and woman who reported Devinney had been threatening them via text messages saying he would come to the house and hurt the male.

When officers arrived they found four people standing outside in a yard. One male had his shirt off. That man was Devinney.

Police asked Devinney to put his hands behind his back. At first Devinney was reluctant to do so. He finally cooperated.

Devinney told police he came to his house to get some clothing when he was attacked.

He told officers this was his house and it wasn’t illegal to come and get his clothes.

Police then spoke to Adam Machida, who had a small cut and redness around his right eye.

Machida told police Devinney arrived at the house and took off running at full speed towards him. He then threw his body at him and Machida fell backwards into the side of the house and then on the ground.

Machida told officers the two men began wrestling and he tried to gain control of Devinney in self-defense. He was trying to protect himself and Courtney Blackburn who was inside the house.

At somepoint during the altercation, Devinney headbutted Machida in the face.