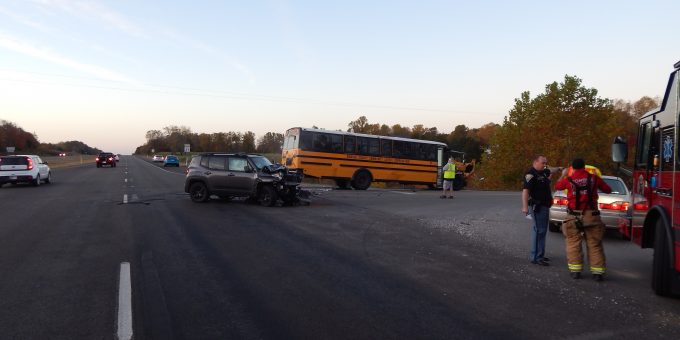 (BLOOMINGTON) – Two people were injured in a traffic accident on Wednesday morning at the intersection of State Road 37 and Smithville Road.

The call reporting the accident came in at 7:50 a.m.

According to the accident report, the driver of the school bus, 58-year-old Steve Grogan, of Bloomington, was driving a 2013 Freightliner School Bus and was traveling westbound on Smithville Road. Grogan pulled out into the path of 46-year-old Marilyn Wessell, of Williams, who was driving a 2016 Jeep southbound on State Road 37.

There were no students on the bus at the time of the accident.

Grogan reports he did not see the Jeep, and multiple witnesses report the driver of the school bus did not stop at the intersection.

Grogan complained of back pain following the accident. He then refused to be transported to the hospital.