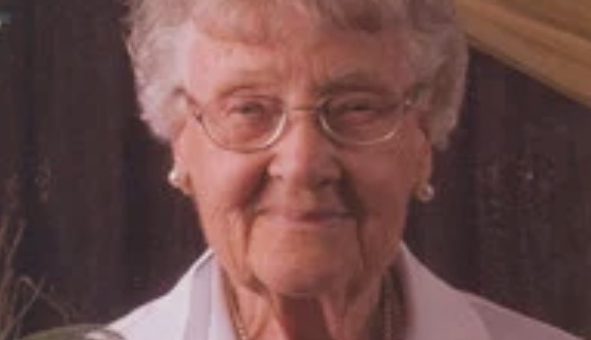 Mrs. Nellie Margaret (Baker) Reynolds, 100, of Columbus, passed away October 15, 2020 at Parkside Court. She was born in Mitchell, Indiana where Spring Mill State Park is located today to Chester and Louisa (Colglazier) Baker.

Family and friends may call at Ferguson-Lee Funeral Home in Bedford on Monday, October 19th from 11 to 1 p.m. with funeral service following at 1 p.m. with Pastor Je M. Lee officiating. Burial will follow at Cresthaven Memory Gardens Cemetery.

Nellie graduated from Bedford HS in 1938. She was active in acrobatics, performing at various schools and alumni functions, and also performed at the Congress Hotel in Chicago in 1936. Her first airplane ride was at the Mitchell airport at the age of 8. At the time she was very impressed with the smoothness of the landing and a love for flying was born.

After marrying Charles G. Reynolds in 1939 they settled down on the east side of Indianapolis and raised sons Gordon and Randy. During this time she served 28 years as a School Food Director in Warren Township schools.

Nellie obtained her private pilot’s license in 1971. At that time she flew with her husband in a Cessna 150. In 1972 she decided to study for instrument training so she could fly further and safer. She flew herself to Anchorage in her private 172 Cessna in 1975 for a worldwide national convention of the Ninety-Nines. She also flew in the Powder Puff Derby Women’s air race.

Nellie moved back from Indianapolis to Bedford to care for her father in 1988. During this time she started taking art lessons. She did many oil paintings with some being hung in the Spring Mill State Park dining room.

Nellie joined a writing class at Oakland City University in Bedford and during that time wrote and published six books. Most of the books talk about her experiences in life and flying. She belonged to the Ninety-Nines (Women’s International Organization of Pilots) and was past president of the club. She was inducted into the International Forest of Friendship in Atchison, Kansas.

Nellie brightened the room wherever she went and always had a smile on her face along with a positive attitude. She commented many times what a blessed life she was graced to have lived. Her family was blessed to have such a strong, loving, and faith filled matriarch. She will forever remain in our hearts and they will continue to lead by her example.

“I have had a lot of fun in my 100 years. There has been nothing in my life that was planned. It just came along. So don’t be afraid of trying something new.” -Nellie Reynolds

She was preceded in death by her husband Charles Reynolds; brother, Chester Junior (Margaret Ann) Baker; and son Gordon Reynolds.

Please share memories and condolences at www.fergusonlee.com. Memorial contributions may be made to First Presbyterian Church of Bedford.