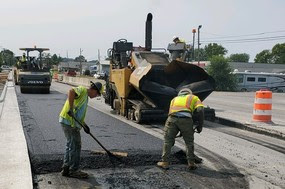 (MARTINSVILLE) – Crews have been paving the way to major progress on State Road 39. The widening work that has been underway since spring is winding to a close.

Expect crews to complete their work along S.R. 39 and Morton Avenue in the next couple of weeks.

Watch for intermittent flagging in the area. Pavement widening is complete and crews will soon finish final surfacing and permanent striping. The work is happening at night when traffic is lighter.

Motorists can expect the pavement to feel rough for a few days between milling and adding the final layer of pavement. Crews are improving S.R. 39 in advance of next year’s temporary closure of S.R. 37 in Martinsville. Portions of S.R. 39, from S.R. 37 to S.R. 67, are being widened to four lanes to safely carry more traffic during the closure. A five-mile section of S.R. 37, from S.R. 39 to Morgan Street, will close for most of 2021.

Significant work is happening on S.R. 37 where crews are strengthening and repaving the northbound shoulder of the roadway.

Drivers should slow down and watch for extended single-lane northbound lane closures outside of morning rush hour. The work will continue through the fall.

Starting next year, S.R. 37 will be reduced to two lanes – one in each direction – between S.R. 144 and Morgan Street in Martinsville.

Traffic will be shifted to one side of the highway while crews build the new I-69 lanes on the other side. The full closure of S.R. 37 and the additional lane closures will allow crews to complete work on I-69 faster and safer, saving a full year of construction.

The concrete decks on the new Perry Road and Waverly Road bridges were poured last week. Work is expected to be complete later this year on the four bridges that will carry traffic over S.R. 37 near Perry, Waverly, Henderson Ford and Egbert roads.

Necessary utility work has been completed and contractors can now complete the road work and grading to connect Country Club Road and Myra Lane along the northwest side of S.R. 37.  This work will take about a month to complete with Country Club Road expected to open to Myra Lane by the end of October.

Tree clearing has resumed to prepare for continued improvements along the corridor. Trees are being cleared at Henderson Ford Road and work will continue south to Morgan Street. Completing the work now will allow essential work for utility relocations to happen this winter. INDOT preserves two acres of existing trees and replants one acre for each acre cleared.

Ennis Road has reopened at S.R. 37 as construction of the New Harmony Road extension continues. Watch for the stop sign in place for New Harmony Road traffic at Ennis Road. Hundreds of crew members are on the job each day helping to get I-69 to the finish line.

A new section of Twin Branch Road north of S.R. 44 is expected to open later this week.

Flaggers will be in place at Southview Drive and Burton Lane early this week for pavement milling at the intersection. Work is continuing to open Perry Lane access to Lincoln Road and S.R. 37 by mid-October. Perry Road will be closed south of Perry Lane to complete the tie-in work to the Perry Road overpass.

Milling and resurfacing is expected to begin this week on Mahalasville Road between Artesian Avenue and Country View Apartments. Mahalasville Road remains closed for realignment at the 90-degree curve south of Gardner Avenue.