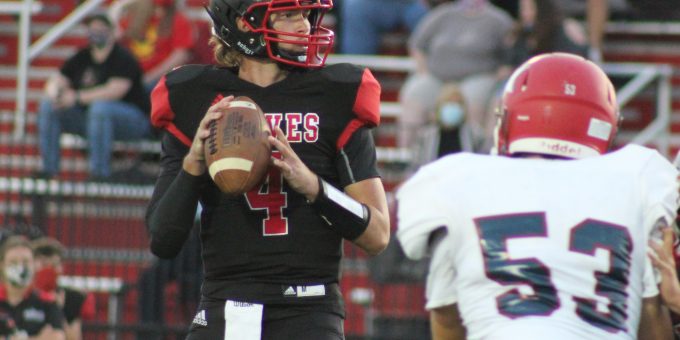 Stultz, poised in the pocket and spotting open receivers, threw six touchdowns passes as the Braves torched BNL’s step-slow secondary during a 56-14 victory on Friday night.

With his targets running amok and uncovered, Stultz threw for 297 yards and directed the Braves (2-4) to four scores in final 7 minutes of the second quarter. When South’s James Mallory returned the opening kickoff of the second half 90 yards for another touchdown, the outcome was obvious and the triggering of the running clock was inevitable.

With the roars of mean machines from the nearby drag strip thundering and mocking, South raced away. BNL (2-4) got left on the starting line, often losing the footrace to the end zone as Stultz connected for four touchdowns of 30-plus yards.

“We threw everything we had coverage wise, blitz side, front wise. Nothing mattered.”

The Braves struck early, converting an interception into a short-field touchdown on the first drive as Stultz connected with wideout James Mallory for a 6-yard strike in the right corner. South made it 14-0 early in the second as Stultz hit Brayden Bender for 45 yards (untouched down the middle of the field, a common theme).

BNL showed life. Brye Lewis unveiled a passing attack, finding Ben Cosner for 28 yards to set up his own 1-yard dive that cut the South lead to 14-7 with 6:59 left in the half.

The Stars answered quickly, probably too quickly. Lewis rifled a deep post bomb to Cosner for 63 yards, then trotted home from 2 yards for a touchdown with 36 seconds left. But rather than walk away to intermission with a two-score advantage, South went for the kill and struck an artery as Stultz hit Mallory for 37 yards on the final play of the period, powering the Braves to a 35-14 lead.

Mallory’s return, veering into the middle before cutting to an open crease and racing down the right sideline, was the dagger, and Stultz’s 30-yard TD pass to Vaughn with 9:37 left in the third sent the clock on its downward spiral.

“You spend the halftime trying to get them pumped up, and you get that,” Weber said. “They were the better team.”

South capped the scoring with a Josh Cottee 26-yard run early in the fourth.

Stultz was 15 of 21, and three of those were drops. He was never sacked, rarely moved out of the pocket.

”This is what we expected all year,” South coach Tim Herrin said. “We knew he could gun sling, and he was focused. He was on.”

Bender caught 5 passes for 147 yards and two TDs. He was often in one-on-one coverage as the Stars paid Mallory a lot of respect with shaded or double-team coverage.

“A lot of single coverage,” Herrin said. “They were worried about Mallory, trying to bracket him. Other guys stepped up and he took advantage of it, hit the guys in single coverage when they took away James.”

BNL’s rushing attack was throttled. Lewis scored twice but was limited to 22 yards. He did complete 5 of 9 for 116 yards, but the middle of South’s defense – particularly the linebacking corps that was banged up early when South was surrendering so many yards – was firm as BNL managed only 61 rushing yards.

South won a home game for the first time in the series. BNL will have to regroup as it looks ahead to brutal challenges the next two weeks.

“At a certain point someone has to win an individual matchup,” Weber said. “You’ve only got two ways you can go. You can quit or keep pushing. These are good kids.

“As bad as this is, and as low as we feel, maybe it will help us move in the right direction.”

BNL will visit Columbus East for their final road game of the regular season next week.