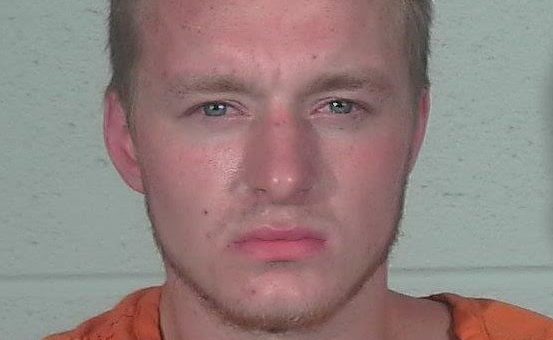 Williams County Deputies had apparently attempted to stop a 1993 Cadillac El Dorado passenger car operating with no tail lights, matching the description of a vehicle possibly involved in an earlier pursuit with the Michigan State Police.

While being pursued in Ohio, speeds reached over 100 mile per hour, and the occupants were observed throwing items out the windows.

The pursuit continued north on State Road 1, then west on Metz Road at continued high rates of speed.

The suspect vehicle continued west on US 20 with shredded front tires, eventually entering into the city of Angola, where ISP Trooper Ben Walker took over the pursuit.

The suspect vehicle failed to negotiate the curves at the circle monument (the Mound) in downtown Angola, and crashed into a large concrete planter.  The suspect driver later identified as 22-year-old Kyle David Eichler, of Adrian, Michigan, fled the crash scene on foot.

Trooper Walker was able to apprehend Eichler at the intersection of Gilmore and Wayne streets after a short foot chase without further use of force.

The two adult passengers in Eichler’s vehicle, 20-year-old Cheyenne Leigh Huntington, of Three Rivers, Michigan and 19-year-old Hezekiah William Hall, of Tecumseh, Michigan, were taken into custody by Trooper Hernandez as they attempted to exit the vehicle.

Both sustained injuries as a result of the crash, and were transported to Cameron Hospital in Angola for treatment.  Huntington was later flown to Parkview Regional Medical Center (PRMC) in Fort Wayne.  Both passengers medical conditions, although not life threatening, are unknown at this time.

After a medical evaluation at Cameron Hospital, Eichler was transported to the Steuben County Jail on two counts of resisting arrest, reckless driving, leaving the scene of a personal injury crash, failure to identify, wanted on a warrants in Michigan for assault with a deadly weapon, obstruction of justice and failure to appear.

Huntington and Hall are not being charged at this time.