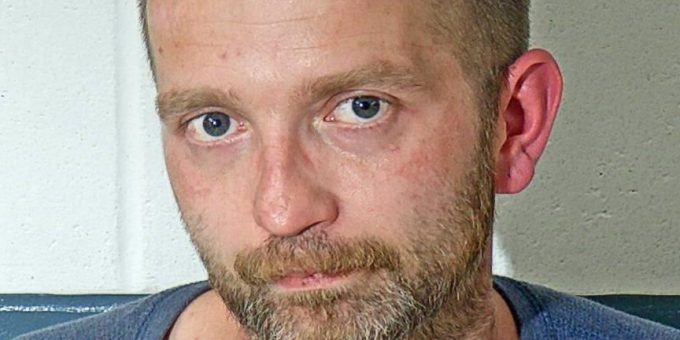 (BEDFORD) – A Bedford man was arrested after Lawrence County Sheriff’s Department deputies were called to a home in the 240 block of Sowder Road Monday morning.

Police went to the home after 36-year-old Nathanial Jones reported his wife missing. Jones told police his wife had left the home in a 2002 black Chevrolet Tahoe at approximately 6 a.m. and that was the last time he saw her.

Later that day at 10:21 p.m. a deputy responded to the home after a report that Jones was suicidal.

When the deputy arrived he spoke to Jones who said he was upset about his wife’s disappearance and felt that his neighbor’s had killed her.

Other officers arrived on the scene to assist and spoke to Jones’ neighbors. They denied knowing the whereabouts of Jones’ wife.

On September 22 officers returned to the home on Sowders Road in an attempt to locate Jone’s missing wife.

Officers located the Tahoe at the end of the neighbor’s driveway. The neighbor told police he found the vehicle around 5 a.m. and moved it, parking it outside of his garage.

The neighbor told police he didn’t know how the Tahoe got at the end of the driveway.

In the vehicle officers found two shell casings, an unused cigarette in the roadway, and a small baggie that contained meth and other miscellaneous items.

Officers then obtained a search warrant for the vehicle which was searched for DNA and fingerprints.

Officers also secured a search warrant for the neighbor’s home and garage.

Before officers began their search the neighbor said Jones’ wife was in the garage hiding under a table.

Police found her in the garage under the table. She told police she was “tired of getting beat.”

The woman told police that around 3 a.m. on Monday her husband had hit her with a closed fist in the face and slapped her. He then drug her by her hair and arm and slammed her on the ground. He then got on top of her and choked her until she started to black out.

Police say the woman had visible injuries to her hands, arms, legs, and face.

She told police Jones then prevented her from leaving. She was finally able to escape and ran into the woods and hid. She got in a vehicle and left once Jones went back inside after looking for her.

The woman says she was going to return home after her husband calmed down. The woman told police she was unsure what had set her husband off.

Police said it appeared the woman was in a cycle of domestic violence involving her husband. They provided her with information for Hoosier Hills PACT.

Police also learned that on Monday at 11 p.m., Jones drove to and parked in the roadway on Little Salt Run Creek Road which is on the south side of his neighbor’s home.

The neighbors heard gunshots and when the neighbor went outside he saw Jones point a gun towards him and then threatened to shoot him.

Police then spoke to Jones who denied hurting his wife or firing any shots at the home, but he did fire shots into the air. He told police he just wanted to know where his wife was.

Police searched Jones’ home and found a .45 caliber loaded Glock handgun in a kitchen cabinet and a shotgun shell was located on the kitchen floor. They also found a lever action rifle and a shotgun in the bedroom along with a handgun magazine, a partial box of 9mm shells, and a couple of shotgun shells. In a shed officers found a muzzle loader, two rifles, and a green container that had a green leafy substance that tested positive for marijuana. A bag of marijuana weighing 340 grams was also found under a chair in the shed. A 9mm Taurus was located in a wood pile by the driveway.

Police say Jones has a prior felony conviction from February 20, 2019 in Johnson County Superior Court III.