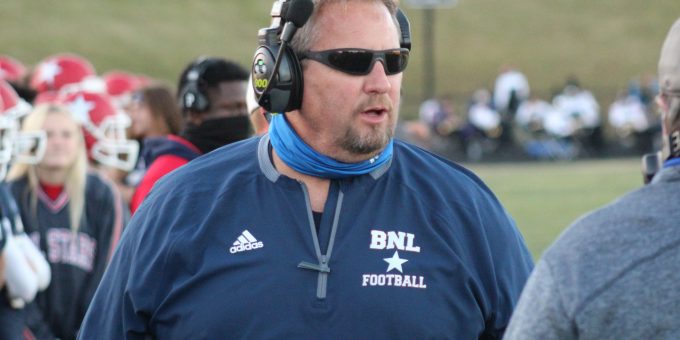 BEDFORD – What the king wants, the king usually gets. It’s good to be the king.

Bedford North Lawrence coach Steve Weber, when ordering off the menu for his triple-option offense, sounds like the king in the famous Bugs Bunny cartoon that made hasenpfeffer a new dish in American households. “Every day the same thing. Variety. I want something different.“

What Weber wants, and what the Stars need, is variety. Diversity. Something different. Of the three phases of the attack – read, keep or pitch – one has been conspicuously absent. BNL needs a throwing aspect to the attack, otherwise the Stars will face more enemies at the line of scrimmage than the final battle scene of Avengers Endgame.

BNL junior quarterback Brye Lewis has been the trigger, running for 603 yards and 5 touchdowns, a huge chunk of that total coming on high-speed improvisation plays. But when Lewis is contained, the Stars have struggled to score. They’ve totaled only 13 points in their three losses.

Defenses are daring BNL to go to the air. Weber is ready to take the dare. Lewis has completed only 16 of 52 passes for 204 yards in five games. He’s still BNL’s best threat, especially in the open field off scramble situations, but there’s room for growth.

“We’ve got to find a way to get Brye to throw the ball,” said Weber, who is also including the option pitch as part of that improvement process. “He is physically able to do it, mentally able to do it. We have to get him to believe in himself and deliver the ball, be more of a point guard for us out there. He can get it done.”

BNL, averaging only 17.8 points per game, could be facing the perfect opponent to test that feature. The Stars (2-3) will hit the road to tangle with Terre Haute South (1-4) on Friday night.

The Braves have struggled on defense, allowing 40.6 points while giving up 278 yards per game on the ground. Those numbers, however, were compiled by opponents on a difficult schedule. Noblesville, Bloomington North and Bloomington South outscored the Braves by a combined total of 148-17.

“I expect to see a team that’s not easy to run against,” Weber said.

BNL’s offense suffered from self-inflicted sputtering last week during a 26-7 loss to Seymour. The Stars were guilty of 9 penalties, many of those wiping out huge runs. Despite the flags, despite the feeling Seymour’s halftime lead should have been greater than 13-0, BNL scored to start the second half and had an opportunity to wrest momentum away until Seymour quarterback Cody Ruble broke a 52-yard touchdown run late in the third quarter.

“We’ve been getting better, but I don’t think that happened last week. We didn’t play particularly well. We got off to a slow start again, which is a problem with this team. On top of that, everything good that did happen got called back. It snowballed on us. I don’t think our emotion was there.”

The Braves have offensive weapons with quarterback Caleb Stultz (45 of 94 for 531 yards in four games), receiver James Mallory (the grandson of former Indiana University coach Bill Mallory and the catch leader with 25 for 238 yards) and running back Josh Cottee.

BNL, with seniors Luke Allender and James Underwood still recovering from concussions, will be seeking to remain undefeated on the road in this short series.

Last meeting: Last year at BNL, Allen Haire blasted for 168 yards and two touchdowns, powering the Braves to a 49-21 victory over BNL. South quarterback Caleb Stultz completed 12 of 15 passes, including his first 10 attempts, for two TDs.