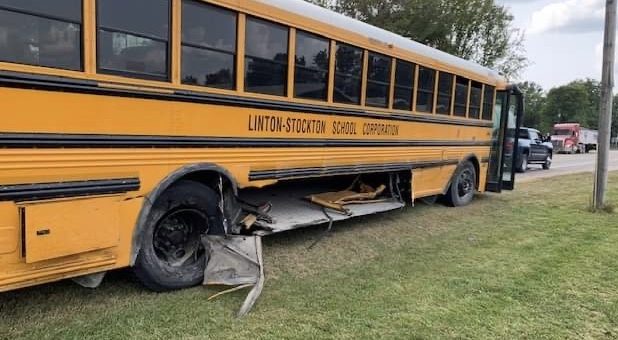 (LINTON) – No injuries were reported after a Linton -Stockton School Corporation bus was in an accident involving a semi Thursday afternoon.

The accident happened at the intersection of State Road 54 and State Road 59 in western Greene County.

The school bus was traveling westbound on State Road 54 when a semi hit the passenger side of the school bus.

The school bus had two adults and six juveniles on board.

The school corporation released the following statement on their Facebook page:

“Our seasoned driver was able to safely slow the bus to a stop after being hit. Our bus bus aide was a tremendous support to the students. Our students handled themselves beyond their years and have a story to tell. Our administrative and support staff along with first responders were on scene immediately. Our office staff communicated swiftly with parents,”