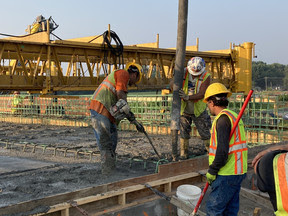 (MARTINSVILLE) – Watch for changes on State Road 37 this week as I-69 Finish Line crews continue preparations for a big traffic shift next year.

You’ll see construction barrels stretching from Martinsville north to S.R. 144. Click here to see a map of the area. Drivers need to stay alert, slow down and be prepared for lane closures. Police are enforcing a reduced speed limit of 45 MPH for the safety of both motorists and highway workers.

Contractors will be paving alongside live traffic in the center median and both directions of S.R. 37 will be affected. The single lane closure to strengthen and repave the northbound shoulder could stretch for up to a mile. Single lane closures on southbound S.R. 37 should be shorter in length. Closures will happen outside of morning rush hour (6 a.m. to 9 a.m.) on northbound lanes and outside of evening rush hour (4 p.m. to 7 p.m.) southbound. Barrels are going up early this week with the lane restrictions expected to begin midweek. Work is expected to wrap by dusk each day. The paving work will continue into the fall.

Next year’s temporary closure of S.R. 37 is south of Morgan Street. The nearly 5-mile stretch of S.R. 37 between S.R. 39 and Morgan Street is expected to close early next year and remain closed for most of the year. Numerous improvements are being made this year to safely move traffic during the closure.

Watch this video to learn more about the work underway and why the full closure means getting the work done faster.