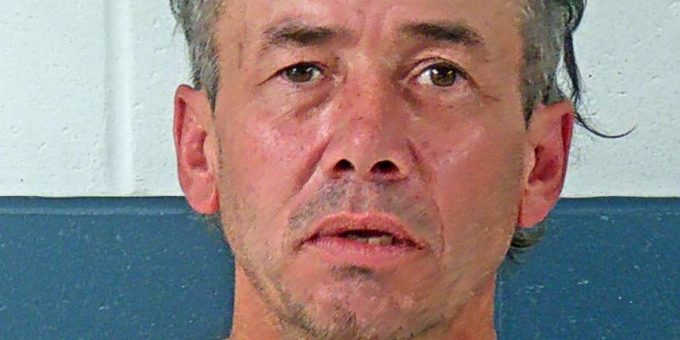 According to a probable cause affidavit, on Monday, July 27 at 11 a.m. ISP and the Indiana National Guard Counter Drug Taskforce was flying in the Guard’s Lakota helicopter when they found marijuana growing in the front yard of a home at 536 Dunken Bend Lane in Bedford.

When they arrived at 11:30 a.m. they found a garden in the front yard with large tomato plants that were hiding the marijuana growing between the tomatoes were four marijuana plants.

Next to the porch was a husky-mix dog on a chain. The dog had no food or water. Police say the temperature was 90 degrees that day. Police fed and watered the dog. The dog immediately drank almost a 1/3 of the water he was given and ate all the food.

When police stepped on the front porch they could smell the odor of marijuana.They found a burn pit and burning were three large bags of marijuana.

There was a truck parked in the drive that belonged to Danny Phillips.

Police knocked on the door and no one answered. Inside the home police could see pots and sodium lights used to grow marijuana. Police then obtained a search warrant which was issued by Lawrence County Superior Court II Judge Williams Sleva.

At 2:10 p.m. troopers executed the search warrant. When they entered they found a room specifically designed for growing marijuana with marijuana plants growing in the room.

In the kitchen troopers found small baggies of marijuana and an estimated 20 small marijuana plants. On the table were two pill bottles with marijuana seeds inside.

In the living room troopers found $621 dollars in a wallet. There was no identification in the wallet. Troopers also found two digital scales on a table and more marijuana next to the wallet.

Police did find utility bills that confirmed the owner of the home was Danny Phillips.

In a room off of the kitchen we located potting soil and potting nutrients, more plastic pots for potting the plants, a Clonex Rooting Gel bottle, and a package that appeared to be a marijuana seed package. Next to that room was the grow room. In that room police found a large sodium light with a 400 watt high output light bulb that was running. In the southern corner of the room were 3 tables that were under 2 LED lights. The tables contained 7 growing marijuana plants and 2 dead plants.

According to the trooper every 60 days, 33 plants could bring in a minimum 99 ounces of marijuana and a maximum of around 165 ounces. The average cost of an ounce of marijuana in Indiana is around $333.

Due to the location of the $621 next to processed marijuana, bags, scales, and paraphernalia troopers believe the drug was being sold and requested forfeiture proceedings started.

Troopers sent the information to the Lawrence County Prosecutor’s Office and a warrant was issued for Phillips’ arrest.