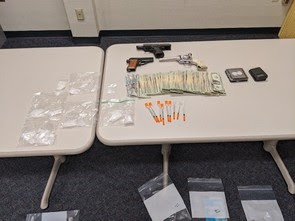 (HARDINSBURG) – Two people were arrested on charges of possession and dealing meth on Wednesday evening following an investigation by officers with the Drug Enforcement Section (DES) assigned to the Sellersburg Post.

On Wednesday, Troopers with DES received information about possible drug activity at a Hardinsburg address just inside Orange County.

Investigators also learned that 41-year-old Todd Sieg, of Hardinsburg, was wanted on a Clark County warrant.

When officers arrived, they located Sieg and 42-year-old Sarah Wethington, of Paoli. Officers discovered Wethington was wanted on a warrant in Orange County.

As a result of the investigation, officers arrested Sieg and Wethington.

Both were transported to the Orange County Jail without incident.

Officers from the Drug Enforcement Section were assisted by officers from the Sellersburg Post All-Crimes Policing Squad and the Washington County Sheriff’s Department Drug Team.