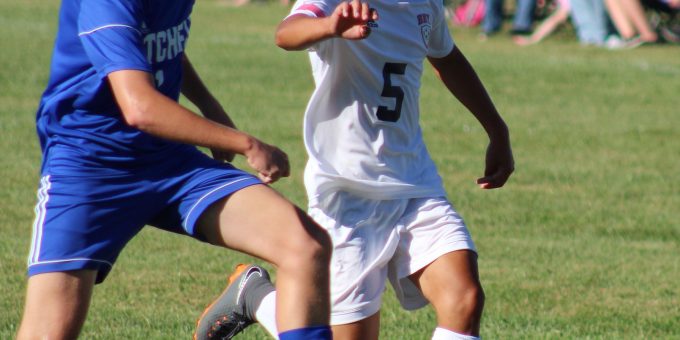 MITCHELL – Facing a blue defensive wall in front of Mitchell goalie Trevin Lee and the net, Bedford North Lawrence had to settle for short chunks and sweat-equity goals rather than works of soccer art.

Grinding and gouging, the Stars finally found the cracks as they recorded a 7-1 victory on Thursday afternoon. Josh Anderson scored twice, Danny Cline added a goal and an assist, and Karter West contributed a score and assist as BNL (1-1) rebounded from its opening-game collapse with a solid road victory.

BNL, expecting scoring chances to come more often and easily, slogged through the first 20 minutes before breaking away, crashing home three times in a five-minute span.

The back-breaking goals came from Anderson, who powered through traffic to collect a Grant Beyers pass at 15:45. Anderson struck again 30 seconds later, blasting a point-blank shot off Lee and winning the race to the rebound for a putaway into an open net.

“When they throw seven guys in front, you almost have to shoot to pull them out,” BNL coach Logan Jackson said. “And we weren’t very accurate. We moved the ball well, but I wish we had been more aggressive going after the ball. Our first touch and passing was bad in the first half, but it got a lot better.”

In the second half, BNL extended its advantage as Jospeh Brazzell found the net off a Gavin Green assist at 26:25, Max Nolan scored with 11:43 left, and West smacked home a goal with 7:33 remaining. Jackson was pleased with the execution after intermission.

“Part of it was confidence,” Jackson said. “Losing that lead (in the opener against Scottsburg) did mess with us a little bit. We came out really flat. I don’t know why our instincts weren’t there to dominate. It was there to take it. We just danced around it the whole first half.

“We have to have that killer mentality. We did not have it early, we didn’t get it until the second half. That was a lot better.”

The Bluejackets (0-2) got on the board late as Cameron Rayhill squeezed through defenders for a sharp shot with 6:24 left. He almost got another inside two minutes, but after stepping past BNL goalie Tanner Robbins, his shot to an open corner went wide.

“I was very proud of them,” Mitchell coach Jeff Selby said. “They never quit. They get frustrated, but they truly never quit. We got a little frustrated, made some mistakes. They played hard. For 12 kids (on the roster), we do really well.”

Mitchell will host Northeast Dubois on Monday. The Stars will visit Floyd Central on Saturday.