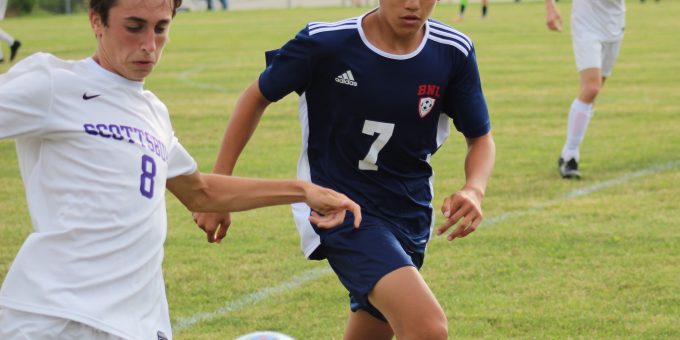 BEDFORD – Bedford North Lawrence, for the final 25 minutes of the first half, played the beautiful game with beautiful results, including the most perfect, picturesque goal that was a work of art.

And then it turned ugly.

Scottsburg rallied from a 3-1 halftime deficit to stun the Stars 4-3 and ruin the season opener on Tuesday afternoon. Noah Smith scored the game-winner with 4:54 left, and the Warriors escaped when BNL’s last-surge shot to salvage a tie cracked off the goal post in the closing seconds.

“I told them they had to buckle down,” Scottsburg coach Brandon Jerrell said of the comeback. “They knew they capable of winning. They felt strongly they were the better team, but the scoreboard did not reflect that at half. So they decided to make a difference. When the whole team does that, good things happen.”

Smith and Lane Hancock both scored twice for the Warriors, offsetting offensive punch from BNL’s Lakota Terrell and Josh Anderson. The Stars did all their damage in a 13-minute span late in the first half, then couldn’t generate a counterattack when Scottsburg retaliated.

Scottsburg struck first when Hancock hammered home a rebound at 28:43 of the first half. BNL answered with brilliance as Terrell blasted home a rebound goal off an Anderson shot at 24:33, and Anderson won a physical battle for pass from Terrell and ripped home a shot into the right corner of the net at 14:12.

The third goal was absolutely the best. Evan Voris lofted a 40-yard free kick, curving it perfectly toward the far right post. Terrell was in perfect position for a header into the open net at 11:47.

“We turned it on,” BNL coach Logan Jackson said. “That’s how we should play in the first half. And then we got more timid. When we pressed them, we were better. We kind of sat back and let them take over.

“We knew they would come out firing. You have to embrace that surge and get back at it. But we never got it turned on again. We weren’t aggressive.”

Scottsburg turned momentum when Hancock got loose for a goal with 35:08 left. From that point, the Warriors could sense the BNL tentative posture and took advantage. The Stars rarely made any offensive advances.

Smith produced the equalizer with 8:58 left as he settled a loose ball in the box and cranked the shot into the upper corner. At 4:54, he rebounded his own saved shot and beat BNL goalie Tanner Robbins with the go-ahead goal.

The Stars, with their sense of urgency rekindled after the lead vanished, nearly pulled out an upset tie. In the frantic final seconds, Terrell got free on the far side as BNL sent a crossing pass over the scoring zone. His header banged off the post with 20 seconds left.

“It’s disappointing,” Jackson said. “We relaxed. We needed to keep pressing, but we got a little complacent. That’s part of it. That’s soccer. I thought we played well. We’ll get there and hopefully patch up a few things.”