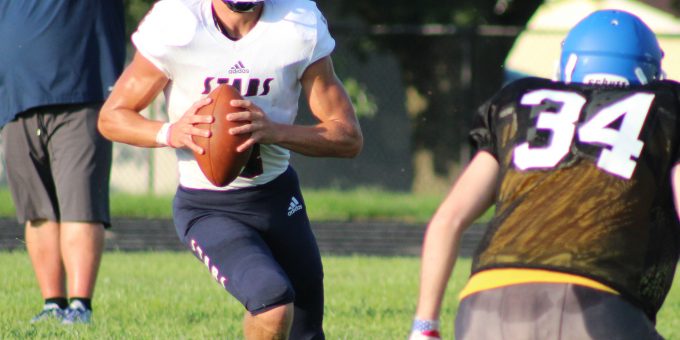 MITCHELL – Brye Lewis, in electrical terms, was a human capacitor, storing up energy during those weary months of virus idleness. Bedford North Lawrence’s junior quarterback, a bundle of fire, finally had to release all that restrained power.

His vent target? Mitchell. Lewis crackled, sparkled and exploded during a super-charged debut performance in the IHSAA-sanctioned scrimmage on Friday night.

Lewis accounted for six touchdowns, running for 192 yards, as the Stars displayed a better-than expected attack, considering all the down time that preceded this nervous return to football. Every team missed months of preseason preparation, and BNL coach Steve Weber anticipated some cringe plays.

The Stars, playing with aggression and relief to be released for action, dominated the Bluejackets with seven scores and three forced turnovers during the 37-play scripted workout. Nobody will keep score, but in years past Mitchell has often emerged from this annual county clash with more memorable moments.

Not this time. Lewis zapped with long-play bursts and gave BNL a blast with his dish-out-punishment running style.

“He looked good,” Weber said. “He runs hard. He’s competitive. He loves the game. When good things happen, he’s all excited and bouncing around. It’s good to play that way.”

Lewis directed two scores during the first part, hitting Ben Cosner for a 17-yard touchdown, then roaring loose from 50 yards for another TD. In the goal-line offense, he ripped into the end zone from 12 yards, connected with Jesse Brock for an 8-yard strike, then powered over from a yard out.

In the final segment, he added a 17-yard scoring jaunt. Reserve quarterback Tyson Patterson accounted for the final score, hitting Brock for a 23-yard TD.

“It was good to get it in, a good scrimmage for our guys,” Weber said. “Some mistakes, but I liked the aggressiveness. This was one of the more aggressive teams we’ve had on the field. We played hard, hustled. It was good to see. We did look better than I anticipated. I was happy. It could have been much, much worse.”

Lewis, who admitted to some nervousness about his passing game, broke nine of his 12 runs for double-digit-plus yards. And he usually punctuated those with a rough greeting for the defender who got in his way.

Jacob Terrell (whose interception would have been returned for a score had the officials not blown the play dead) and Camden Terry picked off passes.

BNL wasn’t all roses and strawberries. The Stars had five fumbles (losing two) and 8 penalties, signs of the collective down time and just how much work remains to catch up.

For the Bluejackets, the highlights were more subtle. They scored three times as Austin Shaffer broke loose for 37 yards on the first series, Nick Mundy powered home from 10 yards in the goal-line work, and he added a last score from six yards on the final series.

Mitchell coach Troy Pritchett pointed to his offensive line as a prominent part. The Jackets totaled 166 rushing yards, which is the foundation of their ball-control game.

“That may have been the best we’ve looked as a unit in a scrimmage, especially with the caliber of guys we get lined up against,” Pritchett said. “In years past, they’ve blown us up in a lot of plays. Our backs were dancing around and still getting 3-4 yards before they got touched. That might be the best we’ve executed. They problem was we did that for three or four plays then got tired.”

Trevin Lee paced Mitchell, which did not complete a pass, with 69 yards while Shaffer finished with 53.

On the flip side, Pritchett noticed issues with conditioning and intensity. Those things can be corrected.

“Our conditioning was really not good,” he said. “We can fix that. It has to be gradual.

“We didn’t do a good job of sucking it up and being tough. And we weren’t mentally ready. BNL had a lot more fire in their step and took it a lot more serious.

Both teams will now turn toward the regular season. If virus tests don’t trigger cancellations, BNL will host Martinsville next week while Mitchell will entertain Edgewood.