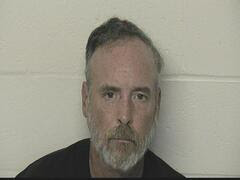 Indiana State Police Detective Josh Banet launched an investigation in June 2020 after he was contacted by the Indiana Department of Child Services and the Austin Police Department and learned of possible inappropriate or illegal conduct involving a minor.

During the investigation, Trooper Banet gained probable cause to believe sexual conduct occurred between Girardot and a child on two separate occasions in May and June of 2020.  The alleged incidents occurred at two separate locations in Austin.

At the conclusion of the investigation, Detective Banet requested an arrest warrant for Girardot on two counts of child molestation with a child under fourteen, a Level 4 Felony.  On Tuesday evening, officers from the Austin Police Department arrested Girardot at his home.

After his arrest, Girardot was transported and remanded into the custody of the Scott County Jail without incident.

Detective Banet was assisted by case workers with the Indiana Department of Child Services and officer Shiloh Hurt from the Austin Police Department.