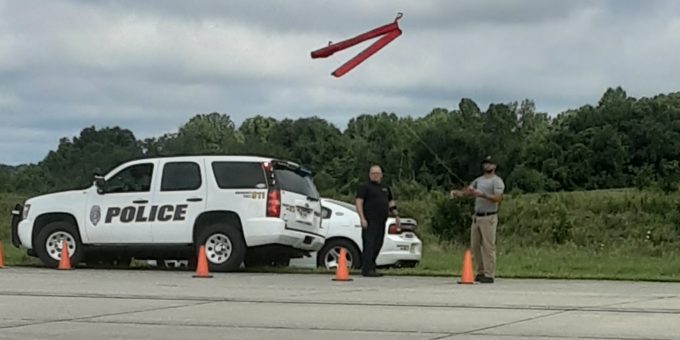 “Every year the state requires us to train at least two hours on Emergency Vehicle Operations,” said Cody Emmons Training Officer for the Bedford Police Department. Emmons also noted that they typically exceed this training requirement.

“The serpentine training will simulate environmental or human factors that police officers may encounter,” added Emmons.

“The foremost thing we want to emphasize is the safety to our officers and also to the general public,” said Emmons.

Although certain police vehicles can reach a higher rate of speeds, the Bedford Police Department does not reach those speeds in their pursuits. This is to protect the general public.

Bedford Police Officers are well trained in these procedures, but this allows them to get out and practice these skills and improve upon them.

This can be a dangerous situation for everyone involved and Bedford Police officers strive to keep the public safe.

The training session took place on the runway at the Virgil Grissom Airport; the same place where officers have completed this training the last couple of years.

Officers used this time to use stop sticks and train on how to deploy them during a pursuit.

Over the last several years, police departments have changed their policies on high-speed pursuits and are limited in what type of suspects they will pursue.

“We want to thank Jeff Lytton and the Virgil Grissom Airport for allowing us to conduct our training here. There is plenty of room to conduct our scenarios and to reach speeds needed for our practice with no danger to the general public,” said Emmons.