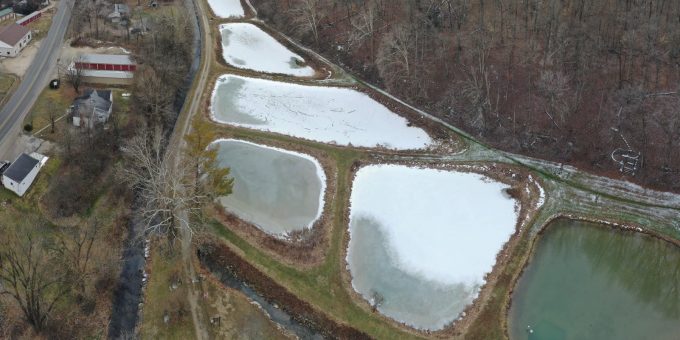 (BEDFORD) – On Tuesday morning the Lawrence County Commissioners voted against providing a crew to help mow the banks of ponds at the Avoca Fish Hatchery.

Marshall Township Advisory Board Member Sam Bond requested the use of a side mount hydraulic mower and operator for the purpose of mowing overgrown vegetation around the fish ponds at the hatchery.

The Indiana Department of Natural Resources is in the process of deeding the property to Marshall Township. Bond says that is scheduled to happen in August.

“Because of this DNR did not budget any funds for mowing,” Bond said. “Volunteers have been mowing the grounds and doing upkeep. Most of our volunteers are older and mowing around the banks of the ponds is difficult because of the overgrown vegetation.”

Bond said funds have been raised to help pay for the care of the property and they could reimburse the county for fuel and the use of the equipment and employee.

However, the commissioners told Bond they couldn’t legally help.

“We would be trespassing,” said Commission Dustin Gabhart. “Besides INDOT says our funds and equipment are to be used for road maintenance and repair. We would love to help, but we legally can not do that.”

Commissioner Rodney Fish says hopefully someone in the public will be able to fill this need.

“Unlike us they would not be in any violation and hopefully after hearing of this need someone could volunteer their time and equipment,” Fish added.

The commissions granted Chad Shew of Community Corrections to apply for a Department of Correction grant.

Holmes informed the commissioners that applying for the $1 million Community Crossing grant has been put on hold.

“It has been postponed due to lack of funding,” he added. “We may know more in September.”

The grant was put on hold because of a revenue shortfall stemming from the COVID-19 pandemic.

The county’s motor vehicle highway and local road and street funds serve as the sources of money to pay for road paving and maintenance. Revenue from Indiana’s gas tax primarily fuels those funds via monthly payments from the state.

However, since COVID-19 hit Indiana in March, auto travel declined and gas prices plunged below $2 per gallon as people heeded travel restrictions and calls to isolate themselves at home. As a result, gas tax revenues in the state dropped.

Holmes says funding for Lawrence County will drop by more than $700,000.

“We are looking at an 18 percent reduction next year which will come strictly out of paving,” Holmes added.

The second phase of bridge inspections is complete. Inspectors did find cracks in Otis Park Bridge which will be welded and repaired. The pony truss bridge on Armstrong Station Road is deteriorating and Holmes believes the 8-ton weight limit will probably be dropped to a 5-ton limit. An abutment issue on Bridge 84 on Donica Church Road was also found which has since been repaired.

Sheriff Mike Branham reported there were 117 inmates in the Lawrence County Jail this morning. Of those, 94 were males, 23 females, one level 6 felon, one Department of Correction hold, and one parole violator.

Last year at this same time there were 180 inmates in the jail.

Sheriff Branham says the numbers are lower because the system is “working better.”

“The prosecutors, defense attorneys, and judges are working together to cut the jail population,” Sheriff Branham added.

Sheriff Branham says the department will purchase a new vehicle with some of the remaining balance.

Emergency Management Director Valerie Luchauer reported she has applied for a grant to pay a portion of her salary.

She is also keeping on top of the county having enough personnel protection equipment including masks and gowns.

“I was surprised to learn that between the courthouse and courthouse plaza we are using 500 masks a day,” she added. “We will be purchasing more.”

The county will be reimbursed through the CARES Act. The county has submitted 4 requests for reimbursement so far, but Luchauer added that several departments have not submitted any invoices or receipts for items purchased.