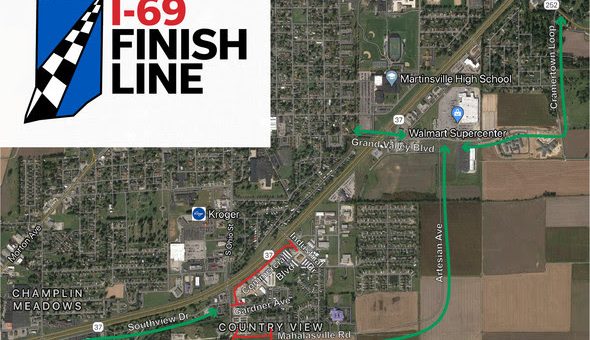 (MARTINSVILLE) – Another long-term road closure will soon begin in Martinsville to rebuild and realign Mahalasville Road in preparation for major I-69 interchange construction next year. Mahalasville Road south of State Road 37 is scheduled to close to through traffic on or after Monday, July 6. The closure is expected to continue through fall.

Mahalasville Road will be closed to all traffic between the 90-degree curve, just south of Gardner Avenue, and Country View Apartments. Local traffic only will drive through gaps in barricades south of S.R. 37 to access Gardner Avenue and other nearby properties.

During the closure, construction crews will be completely rebuilding and realigning Mahalasville Road and nearby drainage to make room for a future I-69 interchange.

Commercial Boulevard is also closed for ongoing realignment and reconstruction work in the area. When completed, access will be restored between Industrial Drive and Gardner Avenue.

Click here to view an aerial map showing the planned future design for the area. A map of road closures and detours is provided below.