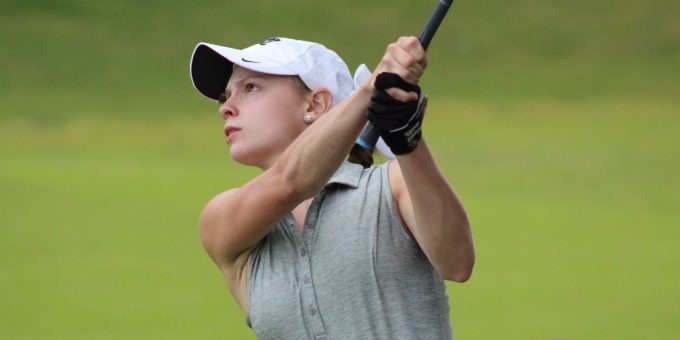 BEDFORD – Peggy Taylor, a former City champion, has spent 10 years helping the younger generation shape and sharpen their golf skills. Did she withhold any secrets? That answer will soon be revealed.

Taylor, the middle school coach for the Bedford North Lawrence program, fired a 3-over 75 to share the first-day lead with former BNL star Taylor Norman after Saturday’s opening round of the Bedford Women’s City Tournament at Otis Park.

Defending champion Olivia Sanders posted a solid 76 to lurk one shot off the pace heading into Sunday’s final round.

Without revealing Taylor’s age, her competition was still in diapers when she won her crown in 2003. She watched them come up through the system, helped them blossom into quality people and players, Now she’ll try to beat them.

“They’ve made me work on my own game, just to keep up with them,” Taylor said. “It keeps me young, I guess.

“I’m not going to hit it as far off the tee as they do, but if I can stay in my game, stay in rhythm, keep out of trouble and stay away from the big numbers, I can be right there.”

Taylor was right there during the opening round, carving out three birdies (holes 5, 9 and 12) while stumbling only once (a double bogey on 13) and finishing with her personal-best score.

“Considering the conditions, this is a lot different than playing with your friends,” Taylor said. “These young girls play a lot more of competitive golf. They still say they get nervous, but they really don’t understand about getting nervous.”

Everyone faces some sort of pressure. For Norman, it’s about adding her name to the list of champions. Her childhood idols and former teammates all won the City title. She has not, one of the few trophies missing from her shelf of collectibles.

“It would mean a lot,” Norman said. “I’ve always wanted to win this since high school. Every one of the really good BNL golfers have won it. I just want to do that.”

She took a huge stride toward that with her 75 that included two birdies (holes 5-6 on the front) and no major mishaps. She complained about her short-range putting, a product of some down time as the coronavirus forced temporary stoppage of college and summer tournaments.

“I’m not as dead-set on as usual,” said Norman, who has played only three competitive rounds in the last four months. “You can’t mimic the pressure you feel from playing in tournaments when you’re just practicing.”

Sanders, heading into her senior season with the Stars, was also a little rusty from a lack of under-fire rounds. She had two birdies (5-6 as well) but dropped two strokes on the downhill 14th hole.

Last year, she won the title with back-to-back 74s, edging Norman by one shot while Taylor finished third. She might need, and expects to need, something a little more special in the second round to repeat.

“I need to kick it into high gear,” Sanders said. “I have to show up a little more, just work on the little things, shake off a little rust and shoot for a lower number.”

In the Senior City, Jeff Brim, Craig Reiner and Dennis Gratzer all posted 74s to share the first-round lead. Sanders’ score also counted toward the girls Junior City, and she leads that event by 13 shots over Ashley Chase.

Colton Girgis took the overnight lead in the boys Junior with a first-round 76, claiming a four-short advantage over Trevin Hutchinson.