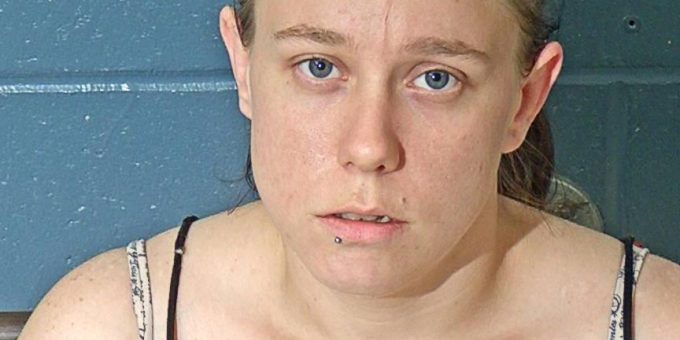 (BEDFORD) – A Mitchell woman was arrested early this morning on counterfeiting, theft, and fraud on financial institution charges.

According to a probable cause affidavit, on December 2, 2019, Bedford Police officers were called to Crane Credit Union after an employee found two counterfeit $100 bills in the ATM machine.

The manager told police that Masterson had the two $100 bills. As soon as the deposit was made, Masterson immediately withdrew $200 in $20 bills which is a red flag for fraud.

The bank manager contacted Masterson who said they had sold some items to someone in Wisconsin and that was the money he gave her. Masterson told the manager she had a handwritten receipt from the man who gave her the bills.

The bank manager told Masterson the bills were clearly counterfeit by the feel and look of the bills. Masterson and her boyfriend, Ethan “Riley” Terrell, then talked to the credit union manager and confirmed Materson’s story and told the manager they would make up the negative balance on their account.

Bedford Police questioned Masterson about the counterfeit money and again she relayed the story of driving to Wisconsin to sell 10 DVDs, an air compressor, plates, and some other stuff to a man. Materson said Terrell handled all the money and the selling of the items.

After several attempts, police finally spoke to Terrell who told police the same story and that he deposited the money in the credit union because he wanted some smaller bills and had no idea the money was counterfeit.

After several more attempts to speak to Terrell and Masterson again, both refused to cooperate or speak to the police. A warrant was then issued for their arrest.

Terrell was arrested in December 2019 on charges of counterfeiting, theft, and fraud on financial institution charges. A pretrial conference is scheduled for July 23 in Lawrence County Superior Court II.