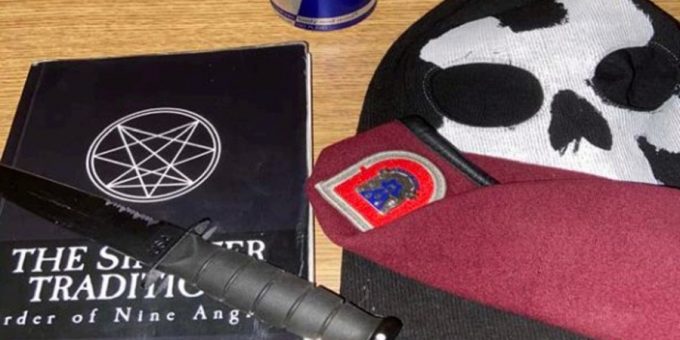 (UNDATED) – The Department of Justice announced today the unsealing of an indictment charging 22-year-old Army Pvt. Ethan Melzer, of Louisville, Kentucky, for allegedly planning an attack on his U.S. Army unit by sending sensitive details about the unit – including information about its location, movements, and security – to members of an extremist organization named Order of the Nine Angles (O9A), an occult-based neo-Nazi and white supremacist group.

The FBI and the U.S. Army thwarted Melzer’s plot in late-May 2020, and the FBI arrested Melzer on June 10, 2020.  The case is assigned to U.S. District Judge Gregory Woods.

“As the indictment lays out, Ethan Melzer plotted a deadly ambush on his fellow soldiers in the service of a diabolical cocktail of ideologies laced with hate and violence,” said Assistant Attorney General for National Security John C. Demers.  “Our women and men in uniform risk their lives for our country, but they should never face such peril at the hands of one of their own.  The National Security Division is proud to support the efforts of those who disrupted this planned attack and to seek justice for these acts.”

“As alleged, Ethan Melzer, a private in the U.S. Army, was the enemy within.  Melzer allegedly attempted to orchestrate a murderous ambush on his own unit by unlawfully revealing its location, strength, and armaments to a neo-Nazi, anarchist, white supremacist group,” said Acting U.S. Attorney Audrey Strauss for the Southern District of New York.  “Melzer allegedly provided this potentially deadly information intending that it be conveyed to jihadist terrorists.  As alleged, Melzer was motivated by racism and hatred as he attempted to carry out this ultimate act of betrayal.  Thanks to the efforts of the agents and detectives of the JTTF, our partners in the Departments of Defense and State, and the career prosecutors of this office, a hate-fueled terrorist attack against American soldiers has been thwarted.”

“As alleged, Ethan Melzer sought to facilitate a deadly mass attack on his fellow service members by disclosing sensitive information to multiple extremists, including al-Qa’ida.  The FBI’s top priority remains to protect Americans from terrorist attacks, at home and abroad, and this case highlights the outstanding work of the FBI’s Joint Terrorism Task Forces, along with our U.S. military partners, to identify and disrupt threats like this one against our men and women in uniform,” said Assistant Director Jill Sanborn of the FBI’s Counterterrorism Division.

“Melzer declared himself to be a traitor against the United States and described his own conduct as tantamount to treason.  We agree.  He turned his back on his county and his unit while aligning himself with members of the neo-Nazi group O9A,” said FBI Assistant Director-in-Charge of the New York Office William F. Sweeney Jr.  “Today, he is in custody and facing a lifetime of service – behind bars – which is appropriate given the severity of the conduct we allege today.”

“This case is another example of the international responsibilities of the Federal Bureau of Investigation’s New York Joint Terrorism Task Force,” said Dermot Shea, the Commissioner of the New York City Police Department.  “Its FBI agents and New York City police detectives will travel anywhere in the world to bring terrorists to justice, in this case, a soldier who is alleged to have forsaken his oath to the United States military and his fellow soldiers.”

According to the criminal complaint and the indictment charging Melzer, which were unsealed today in Manhattan federal court:

Melzer joined the U.S. Army in approximately 2018, and he joined O9A by approximately 2019.  Members and associates of O9A have espoused violent, neo-Nazi, anti-Semitic, and Satanic beliefs, and have expressed admiration for both Nazis, such as Adolf Hitler, and Islamic jihadists, such as Osama Bin Laden, the now-deceased former leader of al Qaeda.  Members and associates of O9A have also participated in acts of violence, including murders.

In approximately October 2019, Melzer deployed abroad with the Army.  Prior to planning the attack, Melzer consumed propaganda from multiple extremist groups, including O9A and the Islamic State of Iraq and al-Sham, which is also known as ISIS.  For example, in connection with the investigation, the FBI seized from an iCloud account maintained by Melzer an ISIS-issued document with a title that included the phrase “HARVEST OF THE SOLDIERS” and described attacks and murders of U.S. personnel in approximately April 2020.

In approximately April 2020, the Army informed Melzer of plans for a further foreign deployment by his unit.  Melzer thereafter sought to facilitate a deadly attack on his fellow service members.  After he was notified of the assignment, Melzer used an encrypted application to send messages to members and associates of O9A and a related group known as the “RapeWaffen Division,” including communications regarding Melzer’s commitment to O9A and sensitive information related to his unit’s anticipated deployment such as locations, movements, and security, for purposes of facilitating an attack on Melzer’s unit.  Melzer and his co-conspirators planned what they referred to as a “jihadi attack” during the deployment, with the objective of causing a “mass casualty” event victimizing his fellow service members.  Melzer acknowledged in electronic communications that he could be killed during the attack, and, describing his willingness to die, wrote “who gives a [expletive] . . . it would be another war . . . I would’ve died successfully . . . cause [expletive] … another 10-year war in the Middle East would definitely leave a mark.”

On or about May 17, 2020, Melzer exchanged electronic communications regarding passing information about the anticipated deployment to a purported member of al Qaeda.  Between approximately May 24 and May 25, 2020, Melzer sent additional electronic messages with specific information about his unit’s anticipated deployment, including, among other things, the number of soldiers who would be traveling, the location of the facility to which Melzer expected the unit would be deployed, and information about the facility’s surveillance and defensive capabilities.  Melzer promised to leak more information once he arrived at the location of the new deployment in order to try to maximize the likelihood of a successful attack on his unit.

During a voluntary interview with military investigators and the FBI, Melzer admitted his role in plotting the attack.  Melzer said that he intended the planned attack to result in the deaths of as many of his fellow service members as possible.  Melzer also declared himself to be a traitor against the United States and described his conduct as tantamount to treason.

This prosecution is being handled by the office’s Terrorism and International Narcotics Unit.  Assistant U.S. Attorneys Sam Adelsberg, Matthew Hellman, and Sidhardha Kamaraju are in charge of the prosecution, with assistance from Trial Attorney Alicia Cook of the Counterterrorism Section.

The charges in the complaint and indictment are merely accusations, and the defendant is presumed innocent unless and until proven guilty.