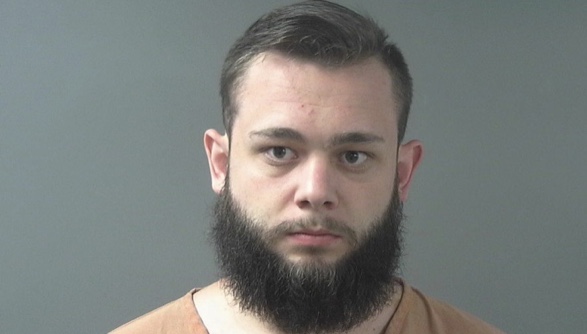 UPDATE: (CLAY CO.) – The suspect in the officer-involved shooting on Wednesday, June 17, 2020, has been placed under arrest.  Marion Tanner Joseph Haywood, 23, Owensburg, Indiana, was released from Regional Hospital in Terre Haute early this afternoon and was taken into custody by the Indiana State Police upon his release.  Haywood has been transported to the Clay County Jail where he is now incarcerated.

At approximately 2:27 a.m., deputies of the Clay County Sheriff’s Department were requested at a residence near the Clay County and Vigo County line off of State Road 46, after a report of a male banging on residence’s door.

The male left before the police arrived.

A short time later, a Clay County Deputy observed a vehicle, meeting the description from the original call, traveling eastbound on State Road 46 near County Road 150 West, at a high rate of speed.

The deputy attempted to stop the vehicle, and a pursuit ensued, continuing northbound onto State Road 59.

During the pursuit, the driver was throwing items from the vehicle which included an improvised explosive device.

The pursuit continued onto County Road 100 East and County Road 300 North, in Clay County, where the driver failed to negotiate a turn, traveling off of the roadway.

It was at that time that the pursuing deputy caught up to the vehicle, but the subject had maneuvered the vehicle back onto the roadway and proceeded to drive the vehicle directly at the deputy’s police vehicle.

Due to the fact that the deputy felt his life was in danger, the deputy discharged his duty weapon at the driver.  The driver continued north on County Road 100 East before stopping and exiting the vehicle, attempting to run on foot.

A Clay County K-9 officer was released, and the male driver was subdued.

Medical assistance was immediately rendered at the scene.  The male was transported to Regional Hospital in Terre Haute, with non-life-threatening injuries, and currently remains hospitalized.  No deputies were injured.

The Indiana State Police Explosive Ordnance Disposal team (EOD) out of Indianapolis arrived on the scene and used K-9 units and special tools to inspect the items within the subject’s vehicle and that was discarded onto State Road 59.

The driver of the vehicle was identified as 23-year-old Marion Tanner Joseph Haywood, of Owensburg, Indiana. Haywood will be arrested once he is released from Regional Hospital in Terre Haute, on an active warrant out of Monroe County for domestic battery with a deadly weapon.

Clay County Deputy Hunter Gambil is the deputy involved in this incident.  He has been placed on administrative leave, which is customary in officer-involved shooting incidents.  Deputy Gambil has one and a half years of service to the department.