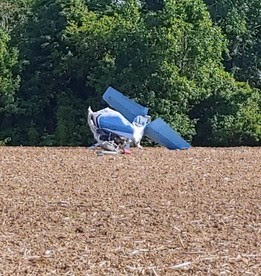 At 3:25 p.m. Saturday, a passing motorist called 911 after spotting what appeared to be plane wreckage in a field off Flint Ridge Road near New Washington in Clark County.

When Clark County Deputies arrived, they confirmed the plane crash and requested assistance from the Indiana State Police in Sellersburg.  ISP detectives and a crime scene investigator were dispatched to investigate.

The preliminary investigation reveals that a Cessna Skyhawk C172 single-engine plane departed Bowman Field in Louisville, KY, on Saturday a few minutes after 3 p.m.  It is believed the plane went down near New Washington around 3:23 p.m.; however, investigators do not yet have a cause for the crash.

The pilot and sole occupant of the aircraft was 30-year-old Joshua E. Warren, of Louisville, Kentucky. He was pronounced dead at the scene of the crash by the Clark County Coroner’s Office.

Investigators from the Federal Aviation Administration (FAA) and the National Transportation Safety Board (NTSB) have been contacted and are expected to arrive on Sunday to further the investigation.