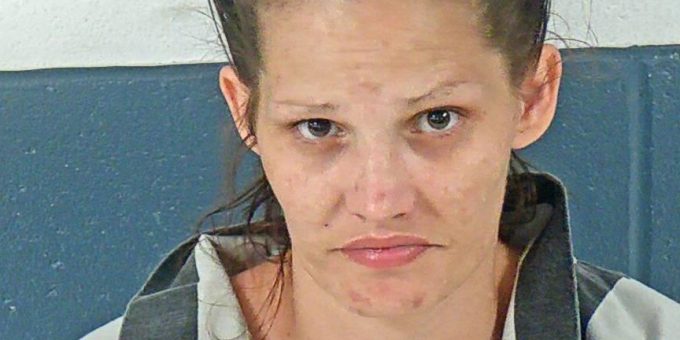 (BEDFORD) – A warrant was issued for a Mitchell woman after a Bedford Police officer found she had meth, a legend drug, and lied about her identity.

Police arrested 31-year-old Lindsay Robinson on Saturday at 5:45 p.m. on charges of possession of meth, identity deception, and possession of a legend drug and drug paraphernalia.

According to a probable cause affidavit, on Feb. 23, at 6:30 a.m. Bedford Police officers were alerted to a person shining a flashlight at vehicles as they drove by on Mitchell Road.

Officers found Robinson and she told police her name was Lindsay Reid. Robinson had no identification on her.

Robinson told police that she had a fight with her boyfriend and was attempting to get a ride to the Speedway station to meet a friend who was going to pick her up.

Robinson asked the officer for a ride. The officer said he could take her, but first he had to search her to make sure she had no weapons.

After finding the drugs, Robinson told police she knew where a man who was wanted on a warrant was and if the officer didn’t take her to jail she would tell him.

The officer said he could not make any deal or let the charges slide but he would request a warrant for her arrest. He then transported the woman to Speedway.

The officer later learned that Robinson lied to him about her identification and that she went by Lindsey Eggles or Linsey Robinson.

The information was forwarded to the Prosecutor’s Office and a warrant was issued for her arrest.