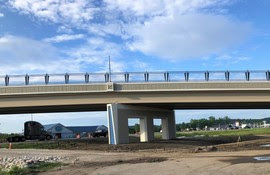 (UNDATED) – The I-69 Finish Line project will have a unique look in Martinsville, and it’s been a group effort. Area residents on the Martinsville Aesthetics Task Force, city officials, and the public weighed in on monuments that will serve as gateways for the city of Martinsville at the State Road 39 and State Road 44 interchanges. Input was also received regarding enhancements for the bridges, barrier walls,, and retaining walls being built.

Those enhancements include an illuminated “M” at Grand Valley Boulevard, an “M” incorporated into the bridge, decorative railing, energy-efficient decorative lighting, and more.

The overpasses and barrier walls include brick and limestone textures that are unique to the southern portion of the I-69 corridor. The design elements will be featured on the Grand Valley Boulevard, Ohio Street, S.R. 252/Hospital Drive, and S.R. 44/Reuben Drive bridges. The colors and patterns for the retaining walls and bridge barriers used in Martinsville will continue north into Morgan County.

You’re starting to see the results of the earlier collaboration. The Grand Valley Boulevard overpass, which is expected to open this month, offers the first opportunity to see some of the aesthetic renderings come to life. Click here to see photos of the work underway at Grand Valley.