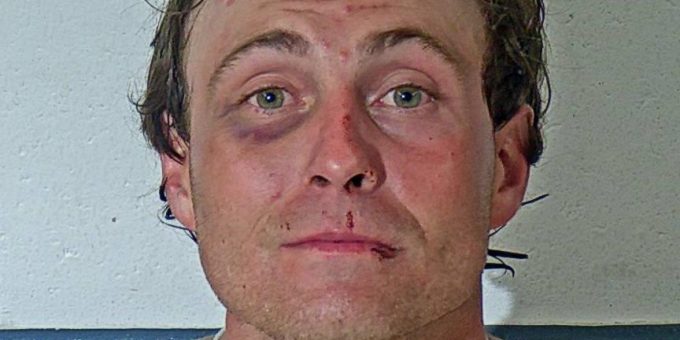 (BEDFORD) – A Bedford man was arrested after Lawrence County Sheriff’s deputies were called to a home in the 1940 block of Erie Church Road after a report of a domestic dispute.

According to police, while they were en route to the home, Melvin had broken the sliding glass door in the rear of the residence and made entry to the home.

The residents were barricaded inside the residence as the caller told police Melvin was in a rage.

When police arrived they found Melvin walking up the driveway with blood covering both arms.

Police asked Melvin to stop and talk to them and he refused, yelling at the officers.

Police say Melvin was intoxicated. Melvin had also soiled himself.

Police gave Melvin some bandages from a medical kit to stop the bleeding on his body.

Police then followed Melvin to the roadway and again attempted to speak to him. He continued to yell at the people in the residence. The yelling continued, causing the neighbors to become alarmed and come outside of their homes.

While speaking with Melvin, he continued to yell at police and attempted to smear his blood on officers and smear blood on the police vehicle.

Officers were finally able to place Melvin in handcuffs.

While transporting Melvin to jail he stated when he was released he would hurt the officer. He then leaned forward and spit on the deputy.

The officer stopped the vehicle at the intersection of US 50 East and Tunnelton Road to speak to Melvin. Melvin continued to spit on the officer. Once at the jail a protective spit hood was placed over Melvin’s face for officer safety.

Logan again attempted to spit through the shield towards jail staff. Melvin was then secured in a restraint chair and placed in a padded cell. Melvin continued to threaten jail staff by saying he was going to kill them all when he got out of jail.