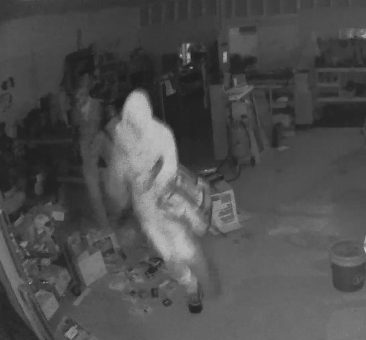 (BLOOMINGTON) — The Bureau of Alcohol, Tobacco, Firearms, and Explosives (ATF) and the National Shooting Sports Foundation (NSSF) – the trade association for the firearms industry – are announcing a reward for information leading to the arrest and conviction of the individuals responsible for the burglary of American Arms Gun Shop, located at 4545 W. State Rd. 45, Bloomington, Ind. ATF and NSSF are jointly offering a potential total reward of up to $5,000.

Below is video captured from the incident.

ATF is investigating this case jointly with the Bloomington Police Department.

Anyone with information about this crime should contact ATF at 1-800-ATF-GUNS (800-283-4867) or the Bloomington Police Department at 812-339-4477. Information can also be sent to ATFTips@atf.gov, or through ATF’s website at www.atf.gov/contact/atftips. Tips can be submitted anonymously using the Reportit® app or by visiting www.reportit.com.

This reward is part of a larger national cooperative initiative between the NSSF and ATF in which NSSF matches ATF rewards in cases involving the theft of firearms from federally licensed retailers. ATF works closely with the members of the firearms industry to curb the criminal acquisition and misuse of firearms.