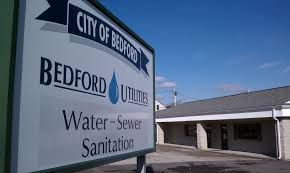 (BEDFORD) – The Board of Works meeting looked different on Monday afternoon as the city responds to concerns regarding COVID-19.

The meeting was attended only by the Board of Works members and the local media. Each department head waited outside the meeting area to be called in one at a time to make their requests.

The public is still welcome to attend the meetings at this time but a few restrictions are in place as the health emergency continues.

The Board of Works approved Bedford Utilities Director Misty Adams’ request for a loan application from Indiana Finance Authority for two different projects the Utilities Department will be taking on in the near future.

The first project will be a $9 million grit system improvement at the water treatment plant. According to Adams, the system was repaired in 1999 and 2000 but parts are becoming harder to locate for the 1970s-era system.

As part of a consent agreement between the city and EPA, this project is needed to meet those requirements. The project is expected to last 12-18 months depending on the weather.

The second project is a $1 million construction of a lift station located near 22nd and F Streets. At this time the total loan amount is unknown as the city is seeking some grants. The Bedford Redevelopment Commission has committed over $389,000 towards the project.

The Board of Works approved new signs and crosswalk painting at the Milwaukee Trail at both U and R streets. Crosswalk signs will be installed where the trail crosses the existing street after Bedford Police Chief Terry Moore looked around the area and concerns were expressed by Bedford Councilman Brad Bough.

Bedford Police Chief Moore looked around the area and noticed that there were no speed limit signs on the three streets. He then recommended going ahead with the installation of the signs.

Bedford Police Chief Moore’s request for permission to participate in Operation Pull Over was approved. The $47,000 grant will be split between the Lawrence County Sheriff’s Department and Bedford Police Department. The grant is administered through the Indiana Criminal Justice Institute.

The following promotions were approved following the retirement of Bedford Firefighter John Gould. These will be probationary for one year, with a six- month evaluation before the position becomes permanent.

Bedford Parks Director Barry Jeskewich’s requested to hire engineer Bill Riggert to oversee the Red Brick Renovation. The Red Brick is a Historic Landmark and efforts must be made to ensure the construction maintains the historical design of the building.

The Board of Works also gave Jeskewich permission to start seeking bids for the Red Brick Renovation project. Officials are hoping bids will be available for the Park Board to review by the April parks board meeting.

The City of Bedford owns property located at 429 I Street and the Board of Works approved seeking appraisals to sell the property.

The Board of Works also gave Mayor Sam Craig the authority to act on behalf of the board to address work hours, earnings, and benefits during the COVID-19 emergency. Employees may have to be sent home during the course of the emergency. Officials note that paid time off and sick hours may have to be managed during this process.