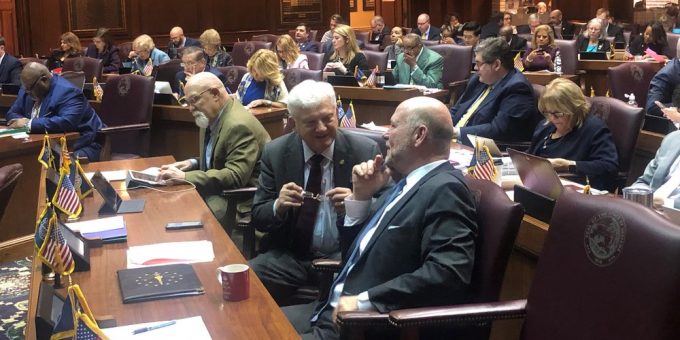 Tom Davies of the Associated Press reports, the state Senate voted 29-19 in favor of a House-Senate agreement on the bill, with the House later endorsing it in a 64-32 vote as lawmakers reached the final adjournment this year’s legislative session early Thursday.

Republican negotiators failed to reach agreement on a proposal that could’ve forced the state attorney general from office if his law license is suspended over allegations that he drunkenly groped four women. They approved toughening the penalties stores could face for selling smoking or vaping products to anyone younger than 21 years old.

The possible rental rule restrictions emerged two weeks ago as Republicans took up the limits backed by the Indiana Apartment Association as the Democratic-controlled Indianapolis City-County Council approved an ordinance that included allowing fines for landlords who retaliate against renters over living condition complaints. The city’s ordinance also required landlords to give tenants information on their legal rights and responsibilities.

Republican legislators and the apartment association argued that tenant-landlord regulations should be uniform statewide.

“All of these are designed to have a predictable, stable, knowing housing market in Indiana so that everybody knows the rules throughout the state,” said Sen. Aaron Freeman, an Indianapolis Republican.

Tenant advocates maintain the proposal would be unfair to the estimated 30%, or some 2 million, of Indiana residents living in rental housing. They say they’re worried the new state law would negate local regulations, such as those on apartments in college towns, including Bloomington and West Lafayette, and threaten local anti-discrimination ordinances in cities such as Indianapolis, Columbus and South Bend that go further than state law and include protections based on sexual orientation.

Rep. Robin Shackleford, an Indianapolis Democrat, said during House debate that the apartment and builder associations were the only groups visibly supporting the legislation, then read off the names of several dozen organizations around the state opposing it.