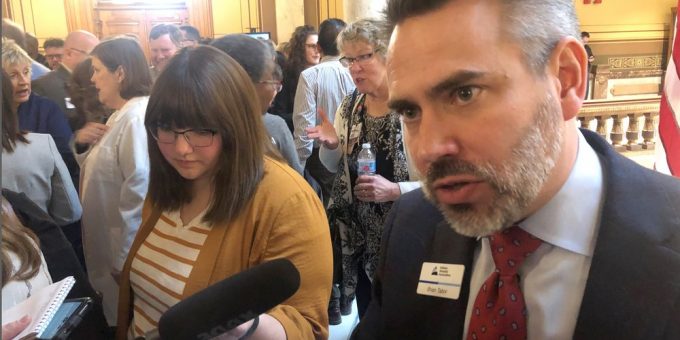 (INDIANAPOLIS) — Indiana lawmakers on Monday rolled back a proposal that could cut how much insurance companies pay for medical services performed at offices located away from a hospital’s main campus.

That action came after hundreds of doctors and nurses descended on the Statehouse as Indiana hospital officials protested the payment limitations that had been added to a bill Republican legislative leaders see as steps toward reining in ever-growing health care costs.

The proposal would have forced hospitals to charge for procedures based on where they are performed, meaning the hospital would be paid less for medical services performed at a cancer center or other clinics not on its main campus.

Indiana Hospital Association President Brian Tabor said that would squeeze the revenue stream for many hospitals by upending the contracts they now have with insurance companies.

“It would be devastating — hundreds of millions of dollars, if not more, in cuts,” Tabor said. “That would mean closing services, reduction in staff and even the closure of entire hospitals.”

The state Senate voted unanimously in a voice vote Monday afternoon to remove those provision as lawmakers faced a deadline next week to adjourn the legislative session. An amendment adopted would require hospitals to report to insurance companies details about the locations were procedures were performed.

“We are not going to solve all of the problems in one session and we have to take the long term look at this,” Charbonneau said.

A Senate committee advanced the hospital billing proposal last week, even as legislators said they were struggling to specify what should be considered a hospital service and some senators said the possible impact on hospitals hadn’t been sufficiently reviewed.

Hospital-provided procedures will cost more because of the cost of providing services such as 24-hour emergency rooms, but procedures performed off-campus shouldn’t cost as much, said Rep. Ben Smaltz, the legislation’s sponsor.

“That bill is less because it just makes sense, the overhead is less,” said Smaltz, a Republican from Auburn.

Many rural hospitals operate on “razor thin” operating margins and revenue cuts could force closures, putting hospital services an hour’s drive away for some patients, said Rob McClin, the president and CEO of Good Samaritan hospital in Vincennes.

Hospital officials point to some high-level services, such as cancer centers, that are deliberately placed away from hospitals to reduce the exposure of patients to potential illnesses.

Denise Dillard, the chief of advocacy for Methodist Hospitals in Gary and Merrillville, said an off-campus clinic that provides services to pregnant women could be shuttered if the legislation passed — even though it was deliberately positioned away from the hospital to make it more convenient for patients.

“It is about the patients we serve and access — making sure that they have a safe, high-quality place to go that is close to their home, not convenient to our structure,” Dillard said.