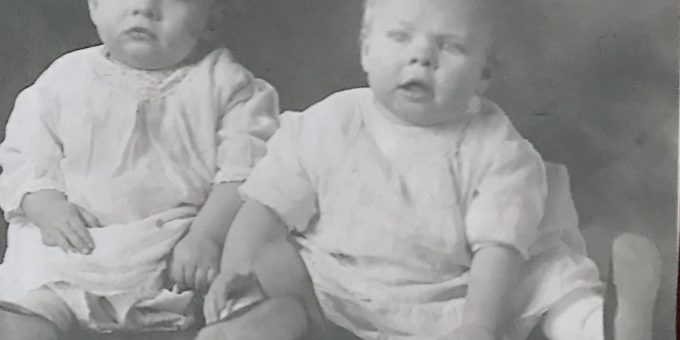 Jack Rainey and Judy Hardman shared memories of their dad and Aunt Vera along with Amber Branham, who is Virgil’s granddaughter.

Vera and Virgil are the children of Melville and Harriett Rainey. The two were born on Heltonville Road where the former Dwight Stagg’s Television Business was.

The Rainey’s grew up on Broomsage Road, north of Bedford. Back then birthday celebrations were not as popular as they are today. Virgil was not fond of birthday cakes, he would rather have a coconut cream pie. During their childhood, it was just another day. He would celebrate his birthday on Feb. 29th when it came around but normally on the Feb. 28th.

“My grandfather was a very special man,” said Amber Branham. ” He attended church and was kind hearted. He loved his many grandkids. We have special memories staying in their home and sometimes living with them.”

Growing up the Rainey twins attended Dive School until 8th grade and then attended. Shawswick School. Virgil graduated and Vera dropped out of school.

Virgil operated the Rainey junkyard, which sometimes brought a lot of jokes on the family over the years. It made the family a good living and supported the family. The junkyard was located between I and J streets on Summit Lane. Virgil was a partner in the business with his other two brothers, Walter and Lawrence. Years later the junkyard was sold to Harold Smith.

“My father was a giving man. There was several IOU’s,” said Judy Hardman, his daughter. “He made all the grandchildren promise that they would pay him back. He instilled that responsibility in them.”

Vera was mostly a homemaker and made ceramics throughout the years, also done the windows at Kresge on the Bedford Square. Vera lived on a farm on Broomsage Road.

There were several good memories of the two. When Virgil was little his parents would tie his leg to something when they camped on the White River because he would sleepwalk in the middle of the night and they were afraid he would fall in the river.

One time he got in trouble and had his car taken away, but that didn’t stop his social life. He drove the tractor to the square in Bedford. The gathering stop of local teens.

The family did not start having family reunions until about the 1970s but those reunions brought the family together and more memories were generated.

The two twins were able to celebrate their 80th birthday together. Virgil bragged to his sister he was only 19 years old and she was much older.

Towards the end of their life, Vera lived at the Hospitality House. She passed away on September 24, 2002. Virgil against medical advice, attended the funeral. Virgil passed away on June 28, 2010.