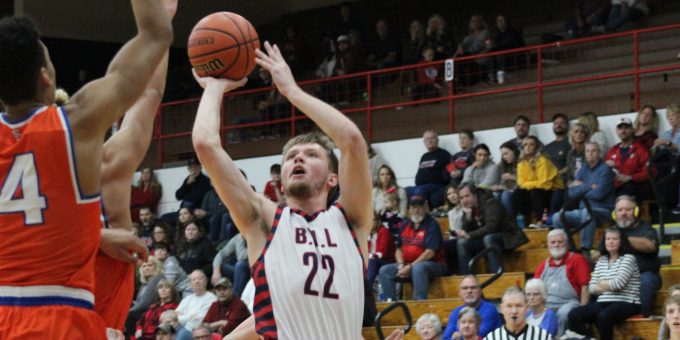 BEDFORD – When the 2019-20 season began, Bedford North Lawrence could only fantasize about championships. The expectations, with a new coach taking over a roster with one returning starter and limited experience, were more about sheer survival than title-worthy success.

The Stars, rising above to greater heights than most anticipated, are one win away from at least a share of the coveted Hoosier Hills Conference crown. That’s not a dream, that’s the reality as BNL (14-8) heads toward a showdown with New Albany (12-8) on Friday night.

BNL (5-1 in the league) is currently tied with Jeffersonville atop the conference standings. The Red Devils still have a home game with Madison, and there are several scenarios where as many as four teams could share the league title. The Stars, who haven’t won the HHC since 2011, care about only one, which is the one that includes a victory over the Bulldogs.

It’s just a dream away. But it could also be a nightmare trip. BNL has not won in the Doghouse since 2012, has not conquered New Albany since the 2012 sectional semifinal. That’s 10 losses in a row, some by embarrassing margins. The Stars face their toughest obstacle to reach such a grand prize.

“It’s going to be a tough challenge,” BNL coach Jeff Hein said. “It’s a tough place to play. But we’re looking forward to it.

“If somebody had come and watched the Columbus North scrimmage, and where we are now, they wouldn’t believe it. We don’t look like the same team at all. We’ve come a long way and we’ve grown as a group. We’ve come together.”

BNL definitely has momentum with a seven-game winning streak. The Stars have accomplished that with defense, allowing only 41.9 points per game during the run.

“The biggest thing is we’ve bought into playing defense,” Hein said. “That’s what got us into the seven-game win streak and put us in a position to at least tie for the conference championship. That’s why we’re talking about a seven-game winning streak, to only give up that many points against that kind of competition is remarkable.”

New Albany will test that. The Bulldogs feature four double-figure scorers, which makes them unpredictable and dangerous. On any given night, any of the four – seniors Julien Hunter and Trey Hourigan, or sophomores Kaden Stanton and Tucker Biven – could erupt.

Biven leads the way at 13.0, while Hourigan (who missed the first two games with an injury) is totaling 12.7. Stanton, a left-handed penetrating guard, adds 11.8, and Hunter – who bounced back from a broken leg last season and more foot injuries this fall – is contributing 11.1 since making his belated debut on Jan. 4.

“They have some pieces,” Hein said. “They’ve been a little up and down at times. You don’t know what you’re going to get. A lot of that is due to the fact they’ve had some injuries. And they’ve got a lot of young kids.

“They normally shoot well at home. That’s a concern. We have to go down there and defend the way we’ve defended over the last seven games.”

New Albany can be great (an 84-60 blowout of Evansville Reitz) or puzzling (a 48-47 loss to Evansville North the next outing after the Reitz victory), competitive with the best (a 69-64 battle with 3A No.1 Silver Creek) or susceptible to the rest (a 43-42 home overtime escape of Seymour).

“We’re like any team,” New Albany coach Jim Shannon said. “When the ball goes in the basket, we look a lot better. It’s such a simple thing, but it’s so true. We have to hit shots, and if we do we can be in any game.

“That makes us potentially dangerous. But we have to play like we’re capable of playing. We are more concerned about our team, because that’s where we are. If we don’t show up and play hard, it will be a long night.”

BNL has to expect New Albany at peak power, which means the Stars will need top-level performances from senior Brayton Bailey (20.9 points, 7.6 rebounds and 5.4 assists), junior wing Kooper Staley (8.1 points) and junior Ben Cosner (6.2), who is probable after missing the Brownstown game with a tender ankle.

Bailey, of course, will get a lot of attention.

“I have the utmost respect for him,” Shannon said. “He’s one of my all-time favorites of kids I have gone against. I watch a lot of games, on film and in person, and two things stand out. First, he has battled to get better. Second, he has filled shoes no person can fill.

“People don’t realize how hard that is. That can’t be easy. He’s gone above and beyond what anybody should have to do in that situation. And I see so many attributes in Brayton that I used to see in Damon – the drive, the competitiveness, the willingness to win.”

New Albany won last year’s game 57-54. Chris Johnson had 25 points and Jordan Thomas came off the bench to score 18 points without missing a shot (one of the reasons the Dogs shot 64 percent that night). Bailey had 18 and McCall Ray totaled 15 for the Stars.