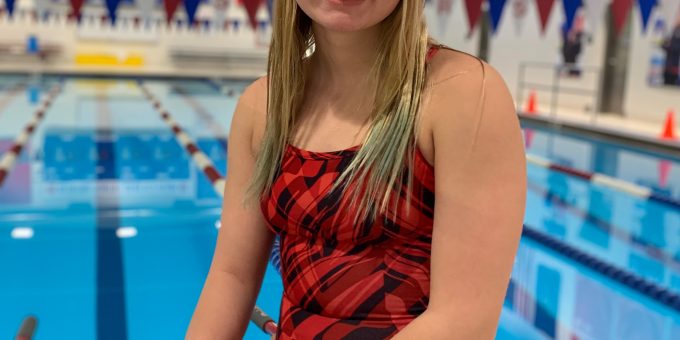 BEDFORD – Ursula Patton’s only competition in her sectional race was herself, the clock, and her own school mark in her main event. That will change.

Bedford North Lawrence’s record-setting junior will compete in the 500-yard freestyle during the preliminary round of the IHSAA girls swimming state finals on Friday night.

After leaving the sectional field in her wake, touching the wall over 20 seconds ahead of her nearest rival, Patton is seeded 27th in the state field after breaking her own school record in 5:22.67. The top 16 will advance to the consolations and finals on Saturday at the IUPUI Natatorium.

Patton expects to drop more time. She has not finished the taper process, which allows a swimmer to cut down practice yardage and rest for a peak performance. The Natatorium is known as a super-fast venue. She’s ready to hit the water.

According to the seed times from the sectional races, Patton will need a significant time drop (somewhere around the 5:05 mark) to make the top 16. She’s not worried about that.

“It’s just awesome to have the experience,” said Patton, who is making her third straight trip to the state meet. “I try not to let what everyone else is doing affect my mindset. I try to swim my own race.

“It gives me confidence, that I’m improving, that I’m not staying the same. That makes me excited for next year. Hopefully I can keep doing that.”

BNL coach Terry Tlustek believes Patton can make an impact and set the tone for next season.

“She really wants to lower her time and continue to progress,” he said. “Realistically, she’s thinking top 20. But I’m never going to tell a kid they can’t accomplish something. I think it’s quite possible. She didn’t have anyone to race against in the sectional. That will motivate her.

“As far as the top 16, with the time it takes for that, ultimately that’s what she’s going to have to do. It’s doable for her. She has another year to go and there are still some things to clean up on her stroke, as far as discipline and techniques. If she puts it all together, she’s capable of really good things.

“She keeps chipping away at it and she still has progress to make, as far as technique and more maturity physically that can help her out. It’s not a bad place to be.”