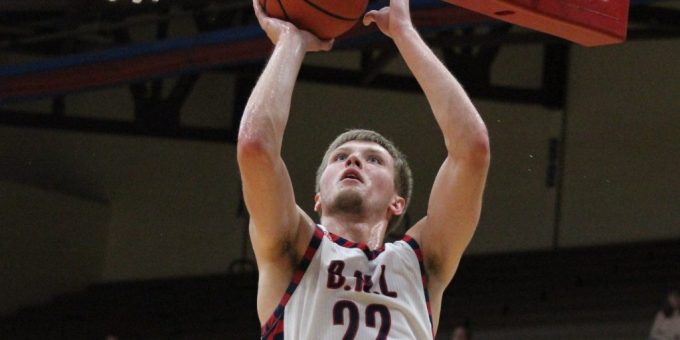 BEDFORD – If nothing else, forgetting all the points and highlights during his four-year career, Brayton Bailey might be the toughest kid to ever wear a Bedford North Lawrence basketball uniform. No choice, really. If not, he would have been a shattered teen by now.

Every day, constant comparisons. Every day, bring the best or hear the critics. Every single day. White noise, hard to tone out. When you’re Damon Bailey’s son, when you follow in the footsteps of an Indiana legend, when you play on the court bearing his name, when you don his college number, it’s like living with the static from an AM radio station in your ears.

If you choose to listen. Bailey does not. That’s how you survive four years of social media buzz without losing your mind. Turn if off, like an old man’s hearing aid. Only hear what you want to hear.

Bailey has not only survived the gauntlet, he has thrived. Now he arrives at the end, ready to walk on Damon Bailey Court, escorted by his parents, for Senior Night on Tuesday, prior to facing Loogootee. One last bow. Where did the time go?

Tough, this guy is. The chants of “Daddy’s better” from the student sections during road games. The whispers and stares that surround a curiosity or celebrity when they walk past. Doesn’t faze him. Did he ever hear it? Yes, that can’t be escaped. Did he ever care? Nope.

“Yeah, but I don’t think about it. I just do me,” Bailey said. “Everybody holds me to a higher standard, but it’s not affected me at all. I just do what I do, and not think about what other people will think. I just know what’s right and what’s wrong.”

”Winning is the most important thing,” Damon said. “He goes out every day and competes. He doesn’t play well every game, doesn’t do exactly what you want him to do every game, but there’s very few times that you can say he didn’t play hard.”

He learned that lesson long ago. Picture this scene: it’s 2014, and a 12-year old boy is hanging around practice as Dad coaches the eventual BNL girls state championship team, including Alexa, the elder of the kids. It’s time for ballhandling drills, and Brayton jumps in.

The exercise: face two defenders from the far corner of full court, beat them 84 feet to the basket and score. Alexa is a defender. Brayton wisely attacks the other girl, beats her and takes off for the basket.

He never got there. Alexa hammered him into the bleachers, refusing to allow the shot airborne. Brayton pops up, and neither Bailey kid says a word. Get back in line, do it again. Dad watched his unfold, hiding a smile. Alexa was never going to let him score, was she? “You have no idea,” his grinning response. Imagine a board game at the kitchen table.

“She is just like my dad,” Brayton said of the older sister. “Nobody was going to beat her. She was going to do what it takes to come out on top. Dad was the same way when I was little. He taught me that was really important. If you’re going to play a sport like this, you have to be the most competitive person.”

When Jeff Hein took over the BNL program this season, he inherited one returning starter. Of course he was going to rely on Bailey for almost everything. But he soon discovered there was more beneath the surface with the kid who doesn’t say much.

Some nights, it has taken a lot of points. Bailey, with 12 more, will finish his career second on the school’s all-time scoring list. He will likely do it on Senior Night, a rather appropriate venue to do that. Dad will watch from the BNL bench (as assistant coach) while his son climbs the ladder to the second spot. No.1 – Dad’s 3,134 – is unattainable.

Nobody expected Brayton to reach that level. Only the foolish ever thought to unfairly compare the son with the father. He has become his own man. Critique his jump shot? Didn’t listen. Make a mistake? Shrug it off.

“I think he’s handled it exceptionally well,” Damon said. “All of my kids, having played basketball and been in the spotlight, have to face the scrutiny from time to time. They’ve all handled it well.

“One of the greatest pieces of advice that I ever got, and I tried to pass on, the criticism that’s going to be out there, if you’re getting criticism from somebody who you wouldn’t ask advice from, then don’t pay attention to it. That’s what we’ve lived by.”

Father and Son, first and second on the scoring list. Quite cool. They probably won’t set the state record in that category (Rick and Richie Mount totaled 4,734 between them), but the legacy of toughness, competitiveness and grit will endure. The only remaining question – who wins the backyard one-on-one? Age is an eventual great equalizer. Can a 48-year old stop the stallion when he tucks that ball under his right arm and charges to the rim? Dad might still know a few tricks.

“It’s been a couple of years,” Brayton said. “I think he beat me last time. I don’t know if he wants to play me now. He hasn’t brought it up.”