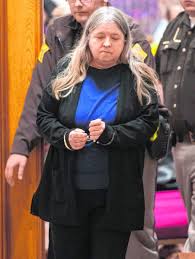 (GREENWOOD) — A woman has been found guilty but mentally ill in the slaying of her 83-year-old aunt more than a dozen years ago in southern Indiana.

A jury on Friday convicted Stephanie Bryant, 58, in the 2006 beating death of Stella Morgan, the Johnson County prosecutor’s office said in a release.

Morgan’s body was found in a shed behind her Greenwood home, south of Indianapolis. Bryant was arrested at an Indianapolis bus station.

She was declared incompetent to stand trial and spent the next 12 years in a mental institution until her competency was deemed restored in November 2018, the prosecutor’s office said.

Bryant will be sentenced Feb. 20 and faces 45 to 65 years in prison where she will receive counseling and treatment. She also is entitled for credit for the time she spent jailed and in the mental institution.

Bryant’s conviction provides some closure “for a family which has been suffering for over a decade,” prosecutor Joseph Villanueva said.

“Justice was served,” he added. “In this case, the jury accurately assessed the need to hold Bryant accountable while still recognizing the mental health components which were present. That is all the family ever wanted.”