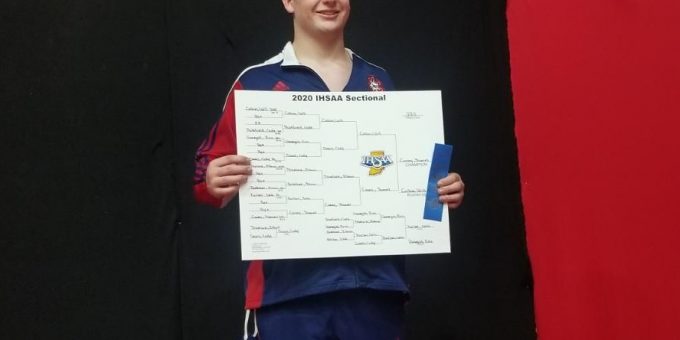 HUNTINGBURG – James Covey won the sectional championship at 220 pounds as Bedford North Lawrence qualified three wrestlers for the second stage of the state tournament series during Saturday’s sectional at Southridge.

Covey plowed through three opponents to win his title, while Derek Hutchens (132 pounds) and Gunner Connaughton (195) finished third in their respective divisions. The top four in each weight class advanced to the regional at Bloomington South on Feb. 8.

Covey (30-3 and the second seed) opened with a pin of Floyd Central’s Seth Kaiser in 47 seconds, then topped Mitchell’s Ethan Truelock in 3:56 in the semifinal. In the championship match, he earned a revenge win over Jasper’s Will Collon, reversing a 1-point loss earlier this season with a 3-1 triumph over the top seed.

“It feels amazing, from not advancing last year to winning,” Covey said. “I just had to get my mind straight, think about what I was going to do, how to react.”

“I told Covey he was going to win this sectional,” BNL coach Greg Stevens said. “He had already been beaten by him, and that was his motivator. He just had to do it. I had no doubt in my mind he could.”

Hutchens (18-15) went the hard route through the consolation bracket. He lost to New Albany’s Jordan Robertson in 2:42 in the opening round, but bounced back with wins over Southridge’s Cayden Andrews (pin in 2:39), Jasper’s Cale Schmidt (6-3) and Forest Park’s Cole Maher (pin in 1:45) in the third-place match.

“We knew the first match would be tough,” Stevens said. “After he lost, he was upset, but I told him not to worry about it. I didn’t think he would have a problem. He’s really put it together the second part of the season.”

Connaughton also had to power through the consolation rounds. He lost to Southridge’s Efrain Zarate (a pin in 5:44) in the opener, then conquered New Albany’s Lucas Lengle (pin in 1:22), Pike Central’s Corey Goeppner (5-4 decision) and Floyd Central’s Jackson Early (6-4 in the third-place match).

“Gunner was great today,” Stevens said. “For a kid that’s only wrestled for a couple of years, he can handle the heavier weight (he tipped the scales at 179) and the bigger guys. He’s been able to get the job done. It’s been impressive.”

The top four in the regional will qualify for the semistate at Evansville on Feb. 15.