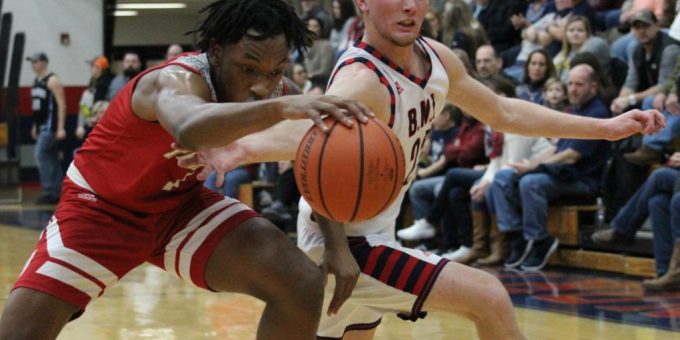 BEDFORD – The unexpected resignation in late August of coach Joe Luce rocked Jeffersonville basketball. The Red Devils were expected to contend for postseason titles, perhaps even start the 2019-20 season atop the polls. Suddenly, chaos and questions.

Chris Moore, just hired as an assistant, was promoted a couple of weeks later. Talk about good timing and circumstance. Jeffersonville already had an 18-year college assistant coach on staff, ready made for the job.

So the Devils have moved on, without missing many steps. They’re lost a few, against some high-quality competition from Indiana and beyond, but they’re atop the Hoosier Hills Conference as they prepare to welcome Bedford North Lawrence to the caldron of Johnson Arena.

Jeffersonville, 12-4 overall and ranked No.12 in Class 4A, is 4-0 in the league, with BNL (9-8 overall, 3-1 in the HHC) and Floyd Central in chase position. The Stars could make a few new friends with an upset road victory on Friday night.

Moore inherited unquestionable talent from the defending sectional and conference champions. Senior forward Tre Coleman, already signed with Nevada and coach Steve Alford, combines with senior point guard Jacob Jones (destined for Wisconsin-Green Bay) for arguably the best big-little combo in Southern Indiana. And sophomore Will Lovings-Watts, already on the radar of several Div. I programs, could end up the best of the current Devils.

“You start with Coleman, he’s the guy that makes it go,” BNL coach Jeff Hein said. “You have to bottle him up. He’s such a great athlete. And Jones is the second guy to be concerned about. He’s just so quick. He can get to the basket and break a defense down in a hurry. When he gets in the paint, he knows what to do with it.”

Moore knew what to do with all that. After graduating from Louisville Seneca and playing at Kentucky State, he spent the next two decades as an assistant at Morehead State, SE Missouri St. and Wright State. He didn’t watch one game film from last season. He could tell what he had.

Jeffersonville hasn’t been perfect, but close to it. Two setbacks (4A No.1 Lawrence North in overtime and 3A No.1 Silver Creek) were razor-thin margins. The Devils also fell to Kentucky state runner-up Scott County and 4A No.10 Indianapolis Attucks, no slouches among that foursome. They’re on a current six-game winning streak.

“We know there are a lot of good teams out there,” Moore said. “We’ve had stumbles along the way, and the guys have taken it personally to get better. We’ve had the fortune, or the misfortune, of playing a tremendously tough schedule. I’ve been proud of our guys as they’ve stepped up. They know they can play with anyone if they’re ready to play.”

“Any time there’s a Bailey on the roster, you’re concerned,” Moore said. “He’s scoring very well. If you don’t match their toughness and physicality, you’re in for a long night. Perhaps they’re not as athletic at every position as some people say we are, but they’re tough, they compete and know their roles.”

BNL won last year’s regular-season clash at BNL Fieldhouse, with Bailey scoring 21 points during a thrilling 67-61 victory. The Devils came back with the one that mattered more, cruising to a 75-54 triumph in the sectional semifinal as Jones scored 21 points.

“It’ll be a tall task, but I like there way we’re playing,” Hein said. “We‘ll have to elevate our game to be able to compete, more than what we were able to do last weekend. But the kids are up to that challenge.

BNL went old-school, playing five starters for 32 minutes in the win over Edgewood. Ben Cosner had a career-high 18 points, Bailey added 17 points, 11 boards and 7 assists, and Jackson Miracle contributed 13 points. With a limited bench, with freshmen penciled into three of the next four spots on the depth chart, that could happen again.

“I thought we played some of our best basketball of the year,” Hein said. “Since our four-game win streak, that’s the best we’ve played on back-to-back nights, especially on the defensive end of the floor. It says a lot about how hard the kids played those two nights and how well they played.”

Pace will be the key against the Devils, who want to force the issue with full-court pressure and court speed.

“That’s something we can’t have, a bunch of turnovers and the game sped up,” Hein said. “That’s what they feed off of, allows them to gain momentum and get into high energy. They’re so quick when they’re running downhill to the offensive end.”