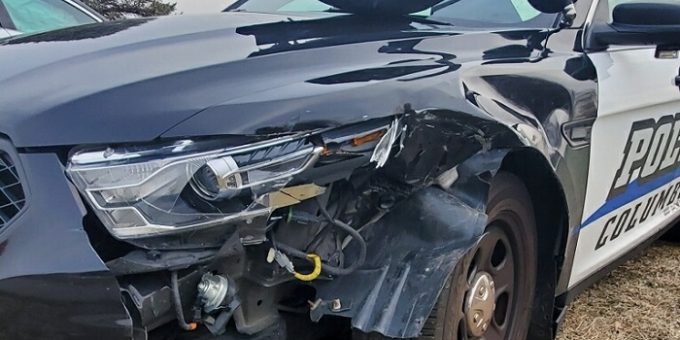 (COLUMBUS) – Columbus police are looking to identify a man who they say stole a vehicle and crashed into an unoccupied Columbus Police Department patrol car.

Around 6:45 a.m. Thursday, officers were called to investigate a suspicious person knocking on doors of homes on Brookside Court. A short time later, a suspicious vehicle was spotted.

Officers were investigating a suspicious person report at about 6:45 a.m. on Brookside Court. A man had been knocking on doors in the neighborhood. When officers spotted the Volkswagen, they stopped the car and the driver got out to speak to the officer.

That’s when a passenger jumped into the driver’s seat and took off, crashing into the patrol car that was unoccupied at the time. The driver then fled the subdivision.

The stolen Volkswagen sped recklessly up Jonesville Road, despite heavy front-end damage and having no working headlights. Because of the heavy morning traffic at the construction area around State Road 46 and State Road 11, officers terminated the pursuit.

Anyone with information on the stolen vehicle or the suspect is asked to call Columbus police at 812-376-2600.