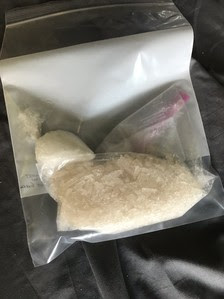 (CLARK CO.) – Indiana State Troopers from the All Crimes Policing (ACP) Squad in Sellersburg arrested an Otisco couple on multiple charges after a search uncovered suspected methamphetamine and a stolen rifle.

Troopers conducted an investigation which resulted in Trooper Taylor requesting a search warrant for the residence located on that property. The subsequent search located over 6 ounces of suspected methamphetamine, a rifle reported stolen out of Clark County, drug paraphernalia, and other items allegedly used for the packaging and distribution of drugs.

As a result of information gleaned from the investigation and search, the residents, 32-year-old Jinger R. Bilbrey, and 38-year-old Justin L. Whitsitt, were arrested and charged with dealing meth, possession of meth, maintaining a common nuisance, theft of a firearm, and possession of drug paraphernalia.

Both Bilbrey and Whitsitt were transported and remanded into the custody of the Clark County Jail.