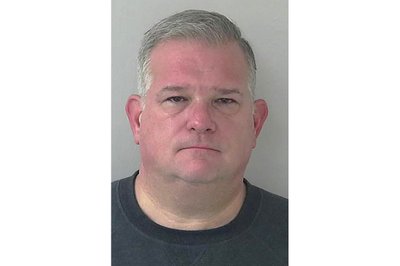 (STURGEON BAY, Wis.) – The fired president of Franklin College in Indiana was charged Wednesday with three felonies after police in Wisconsin say he contacted someone he thought was a teenage boy on a dating app but was actually an undercover officer.

Thomas Minar, 56, is charged in Door County, Wisconsin, where he has a home, with child enticement, use of a computer to facilitate a child sex crime and exposing a child to harmful material.

Prosecutors allege Minar was in Sturgeon Bay, Wisconsin, on Jan. 6 when he started chatting with someone he thought was a 15-year-old boy on Grindr. The boy actually was an undercover officer. Franklin College later fired Minar, who is free on $7,500 cash bound after his arrest last week.

According to the criminal complaint, the undercover officer posed as “Tyler,” a 19-year-old on Grindr. As Tyler, the officer began chatting with a profile with the name of “Top4yngr4fun,” whose profile listed an age of 53. Tyler told the suspect he was 15, and the suspect responded “Very cool. I’m 53. I have a vacation house here,” the complaint said.

Eventually the suspect allegedly sent Tyler photos of a man wearing only underwear, according to the complaint. The suspect also allegedly said in the chat that “I do like younger guys” and that “…it would be bad if anyone found texts from me on your phone … Sadly.”

When Minar allegedly made arrangements to meet the teen at a McDonald’s that night, police arrested him as he arrived at the restaurant. Minar told the officer he met with the boy to be a “friend” and to be his “mentor,” the complaint said.

Minar said he likes making friends and that he was not looking for “sexual things,” according to the complaint. He also said he was a “distinguished person” who works in higher education.

Minar, who is gay, told the officer the sexually explicit chat messages were a “fantasy chat” and that he has never been sexually interested in children, the complaint said.

Defense attorney Brett Reetz told The Associated Press on Wednesday that Minar’s arrest was a “sting operation. There was no victim in this case. There is no way he’s a predator.”

Minar was not seeking a sexual relationship but wanted to be a “friend or mentor,” and is concerned for people coming out, Reetz said.

After Minar’s arrest, Franklin College said its board of trustees’ executive committee “felt it was essential to act immediately and sever his relationship” with the private, liberal arts college, where Minar had been president since July 2015. Minar announced last year that he planned to step down as president effective June 30, 2020.

Franklin College has an enrollment of about 1,000 students and is located in the city of Franklin, about 20 miles (32 kilometers) south of Indianapolis.