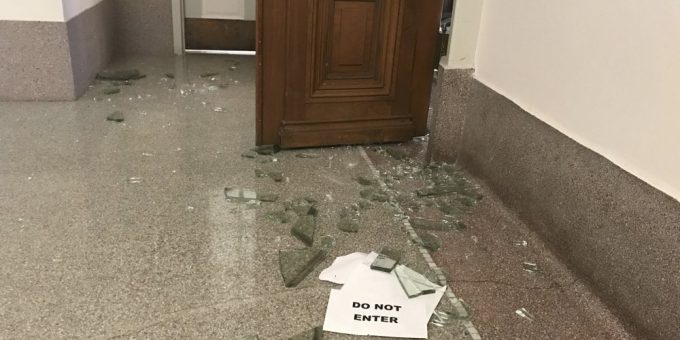 (COLUMBUS) — A man who yelled obscenities at a Bartholomew County judge who sentenced him on drug-dealing charges smashed an “irreplaceable” 19th-century glass doorway as he was being led from court, authorities said.

Jermaine Ford, 33, went on a obscenity-laced verbal tirade inside a courtroom at the Bartholomew County Courthouse on Wednesday, threatening to beat up the judge who had just sentenced him to 22 years in prison on a methamphetamine dealing conviction.

Ford’s anger continued as he was being led away by two deputies when he either used his shoulder or foot to swing a courtroom door so hard into a wall that its glass panel shattered, scattering shards of thick glass into a hallway, said Bartholomew Superior Court Judge James Worton.

The judge said he later learned that a young child “went into a panic attack” in the hallway after witnessing Ford’s post-sentencing outburst, which continued after the glass was shattered.

Worton added an additional six months of prison time to Ford’s sentence for contempt of court.

County maintenance supervisor Rick Trimpe said the glass panel that Ford smashed was an original feature in the courthouse, built in 1874 in Columbus, about 50 miles (80 kilometers) south of Indianapolis.

“The door and glass were installed when the courthouse was originally built,” Trimpe told The Republic, adding that the glass is no longer manufactured and will be costly to replace.

Courthouse employees said some visitors on the building’s second-floor hallway were ushered into its law library and juvenile court for their safety after the glass shattered.